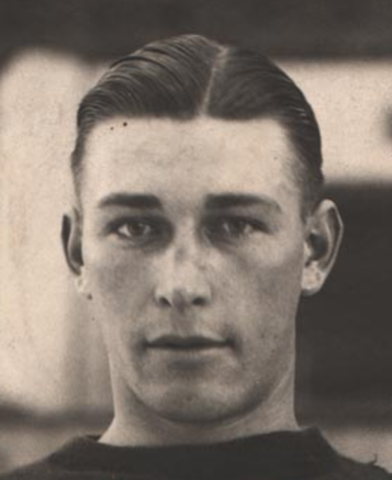 Called Vic by his parents, the youngster, unable to articulate his name, called himself 'Dit,' a nickname that stuck throughout his life.

Clapper started his Hockey career at age 13, playing minor hockey in Oshawa, and going on to play with the junior league Toronto Parkdale Canoe Club Hockey team of the Ontario Hockey Association in 1925, scoring a goal in the team's Memorial Cup run that season.

Clapper turned professional in 1926, playing for the Boston Tigers of the Canadian-American Hockey League, and after a year of seasoning with the Tigers, Clapper was sold to the parent club in October 1927, and he'd remain in the Bruins' lineup for the next 20 years.

Clapper scored his first NHL goal—ten seconds into his first shift for the Bruins in the season opener against the Chicago Black Hawks., and was then placed on a line with Dutch Gainor and centre Cooney Weiland. The chemistry was immediate, and local sports writers dubbed the trio the 'Dynamite Line' because of their offensive explosiveness. With Clapper and his linemates up front, Eddie Shore and Lionel Hitchman on defence and Tiny Thompson in net, the Bruins became a serious force in the National Hockey League. The renowned Dynamite Line, was one of the first named forward lines in Hockey history. The Bruins finished first in the NHL's American Division that season, but lost to the New York Rangers in the Stanley Cup semi-final.

1928-29 began with the Bruins playing in the brand new Boston Garden. Again, the Bruins finished first in their division, and went on to defeat the New York Rangers to win the 1929 Stanley Cup, the first for the franchise. Since 1925, the Stanley Cup final consisted of a best-of-five series, but in the spring of 1929, the NHL declared a best-of-three, as Boston Garden had been booked for a track meet and New York's Madison Square Garden was hosting a circus. Clapper scored the winning goal in game 1, and goalie Cecil ""Tiny"" Thompson backstopped the Bruins to consecutive wins, and posted the third Stanley Cup shutout for a rookie goaltender. Game 2 was played at Madison Square Garden, and the Bruins won 2 to 1. Boston became one of the few Stanley Cup winners in history to not lose a single game in the playoffs, and the last team until 1952 to win every playoff game they had.

In the 1929-30 season, the league considerably liberalized the passing rules, effectively eliminating offsides. The Stanley Cup champion Bruins took especial advantage, breaking many scoring records and recording the highest winning percentage the league would ever see, unsurpassed as of 2012. Leading the charge was the Dynamite Line, as Weiland led the league in scoring, Clapper finishing third and Gainor finishing ninth; Clapper's goal total of 41 was the third most in league history at that time. The Dynamite Line scored 102 of the Bruins' league record 179 goals, as many as last-place Pittsburgh managed. While Clapper scored four goals in six playoff games, the Bruins were shocked in the 1930 Stanley Cup finals by the Montreal Canadiens in their best-of-three series. In fact, the best-of-three final saw Boston lose back-to-back games for the first time all season. Clapper was chosen as the right wing on the NHL Second All-Star Team.

Clapper and the Bruins finished atop the American Division for a fourth consecutive time in 1930-31. Although Dit would never again have a productive season like he did in 1929-30, he was chosen to the NHL's Second All-Star Team in 1931, finishing the season with 22 goals and 40 points. Gainor's scoring fell off badly, and the Dynamite Line was broken up at season's end.

The following year Clapper—with Bud Cook replacing the traded Gainor on his line with Weiland—was named team captain and again finished eighth in league scoring, but an injury-riddled Bruins' team fell into last place and out of the playoffs. While Weiland was dealt to Ottawa for the 1933 season, the Bruins purchased Montreal Maroons star Nels Stewart and paired him with Clapper to form a powerful offensive unit that led the Bruins back to a division championship.

Although Clapper dwarfed most other NHL players of the time (he stood 6'2" tall and weighed 200 pounds), Clapper seldom abused his size and strength. But on one occasion, he took a butt end to the face from Dave Trottier of the Montreal Maroons and was stunned to see that referee Clarence Campbell (later the NHL president) had not signalled a penalty. Seeing red (blood), he sought retribution, and highsticked Trottier twice in the head, and earned a penalty. While escorting Clapper to the penalty box, Campbell swore at the Bruins' star, causing Dit to turn around, where he knocked the referee to the ice with a single punch. Speculation was heavy that Clapper's punishment would be severe, but Campbell himself pleaded Clapper's case, stating that he felt he had provoked the Bruin into the blow; Clapper received only a $100 fine for the incident.

By 1937-38, the Bruins needed help on defence and successfully experimented by placing Dit on the blueline. Much of the offence was being provided by Bill Cowley as well as Bobby Bauer, Porky Dumart and Milt Schmidt of the Kraut Line. Boston finished first in the division again and the defence duo of Clapper and Eddie Shore was outstanding.

The NHL folded the two divisions into one for the 1938-39 season, and with a formidable line-up, the Bruins finished first. With Clapper in his original position on defense, the reassignment inspired him to play some of the best Hockey of his career. The work of Clapper and Eddie Shore was crucial to Boston's win over the Toronto Maple Leafs in the 1939 Stanley Cup championship, and between 1939 and 1941, Clapper was named to the NHL First All-Star Team three consecutive times. "This is the greatest team ever assembled," declared coach Art Ross. With Clapper being named to the First All-Star Team, thus becoming the first NHL player to be named to an All-Star Team at both forward and defence.

Clapper demonstrated his well-known sportsmanship when he scored his 200th career goal at Maple Leaf Gardens on January 8, 1941. After the game, he presented the stick he used to reach this milestone to Maple Leafs assistant general manager Frank Selke as a token of his admiration. Later that year, Clapper contributed five playoff assists as the Bruins won their third Stanley Cup by sweeping Detroit in four straight games in the 1939 finals.

During the 1941-42 season, Clapper suffered a severed tendon and it was believed that the injury would end his career. Typically, Clapper's resilience and determination inspired him to return the following year with his customary effective play. After the 1943-44 schedule, Clapper was chosen to the NHL Second All-Star Team.

In 1945-46, Clapper took over the coaching duties from Art Ross while continuing on defence and as captain of the Bruins and guided Boston to the Stanley Cup final, although the Bruins lost out to Montreal.

With his ability beginning to be surpassed by younger players, Clapper originally retired before the start of the 1946–47 season, but returned to play in November 1946 to replace the injured Jack Crawford in the Bruins' lineup. He played only sporadically thereafter, and retired for good on February 12, 1947. Leading the Bruins to a 10-1 victory over the New York Rangers in his final game (in which Bill Cowley broke the league career scoring record, the Bruins further announced that day that his number #5 sweater would be retired, and the Hockey Hall of Fame immediately inducted him as an Honoured Member; he was the only active player ever to be inducted into the Hall, and at the time the only living Member inducted (1947).

Clapper retired having played 833 regular season games in which he scored 228 goals and contributed 246 assists for 474 points. In playoff action, he added 30 points (13 goals and 17 assists) in 82 games.

Clapper had retained his team captaincy until his retirement as a player in 1947, ultimately serving as team captain for longer than any NHL player until Ray Bourque surpassed his total in the 1990s.

Clapper then served as the team's full-time coach through 1948-49, but found the position challenging because of his closeness to the players. He would coach the Buffalo Bisons of the American Hockey League in 1959-60, but spent his post-playing years in Peterborough running a plumbing firm and a sporting goods store while serving on the board of directors of the Ontario Hockey Association's Peterborough Petes.