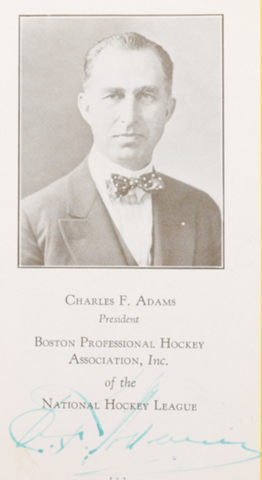 Adams was an avid Hockey fan, watching amateur Hockey games at the 3,500 seat Boston Arena. In 1924 he journeyed to Montreal where he developed a passion for pro Hockey after witnessing the Stanley Cup final series between the Canadiens and Calgary Tigers.

After a scandal involving Boston amateur Hockey players that resulted in many Boston fans becoming disenchanted with amateur Hockey, Adams decided to try to bring professional Hockey to the United States.

His dream soon became the acquisition of a National Hockey League franchise in his home area. Adams' solid reputation and commitment impressed NHL president Frank Calder and the other team owners. He was granted a franchise in the summer of 1924 for $15,000, and on December 1st, 1924 the Boston Bruins hosted the first NHL game ever played in the United States, 2 to 1 victory over the Montreal Maroons.

The first goal in franchise history was scored by Smokey Harris, while Carson Cooper, who assisted on Harris' goal, scored the game winner.

However, Boston lost its next eleven games, as well as having a seven game losing streak, and finished in the basement. The Bruins had signed veteran West Coast star goaltender Hec Fowler as their netminder, but behind a weak defense, Fowler and backup Howie Lockhart played very poorly and the Bruins were repeatedly shelled, allowing ten goals in a game twice, one of which saw Toronto player Babe Dye score five goals on December 22.

The signing of senior league star netminder Doc Stewart and the purchase of Lionel Hitchman helped somewhat, but the team was riddled with injuries, and only Jimmy Herbert and Carson Cooper (who spent much of the season hurt) showed any offensive flair. The team's winning percentage of .200 was the second worst in league history to that date, and remains the tenth worst in NHL history.

Adams refused to stand pat and enhanced his squad by purchasing the entire entire Western Canada Hockey League in 1926 from Frank Patrick and Lester Patrick for $300,000. This gave the Bruins the rights to Eddie Shore, Harry Oliver, Duke Keats, and Frank Boucher. The Bruins could only take on a certain number of skaters from the WCHL. Consequently, a talent pool was made available for the new New York Rangers, Chicago Black Hawks and Detroit Falcons franchises that transformed the NHL by the late 1920s.

Once the Bruins fortunes on the ice were improved, Adams turned his attention to getting the team into a world-class venue. A large indoor arena was needed for the Bruins as well as for the multitude of indoor events that were being scheduled in the fast-growing Boston metropolitan area. Adams was able to acquire the financial backing for the construction of a new arena by boldly guaranteeing a half-million dollars in gate receipts from the first five years of Boston home games. The team played its first home match at the Boston Garden on November 20, 1928 when they lost 1-0 to the Montreal Canadiens.

Under his leadership the Bruins won their first Stanley Cup in 1929.

In 1936 he transferred his stock to his son Weston Adams and minority owners Art Ross and Ralph Burkard.

The NHL's Adams Division was formed in 1974 as part of the Prince of Wales Conference. The division existed for 19 seasons until 1993. It was named in honor of Adams. It is the fore-runner of the NHL's Northeast Division.

Adams was inducted in to the Vermont Sports Hall of Fame in 2013.

Charles Francis Adams was elected to the Hockey Hall of Fame in 1960.