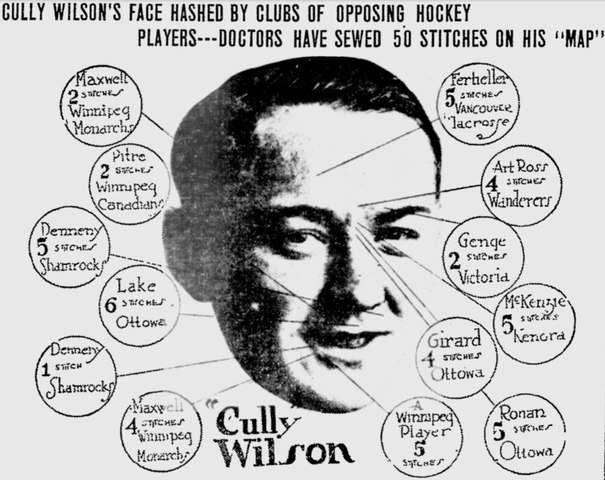 A stitch map of the face of Carol "Cully" Wilson of the 1915–16 Seattle Metropolitans (of the PCHA), 4 years into his professional career. Wilson played 16 more professional seasons and retired in 1932.

Cully Wilson was a physically engaging player who both gave and took plenty of whacks with the stick throughout his hockey career. After the 1919 season Wilson was banned from the Pacific Coast Hockey Association (PCHA) after having broken the jaw of Vancouver Millionaires player Mickey MacKay. He led the NHA, the PCHA and the NHL in penalty minutes in three different seasons.

January 12, 1916 coverage in The Pittsburgh Press also claimed that the back of Wilson's head had so many wounds sewed up that it was too lopsided to wear a hat (which is a bit ironic since Wilson occasionally played with a hat).