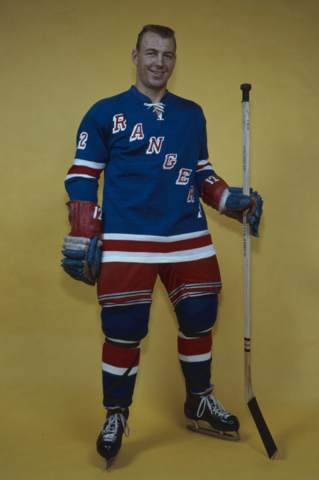 Hebenton started off playing Hockey for the St. Boniface Canadiens, but quickly moved to the Winnipeg Canadians in the Manitoba Junior Hockey League, where he played for 2 seasons from 1946 to 1948.

Hebenton made his professional debut in 1949 for the Cincinnati Mohawks of the American Hockey League. The following season he moved on to the Victoria Cougars of the Pacific Coast Hockey League (subsequently renamed the Western Hockey League. He starred with Victoria for five seasons, his best year being 1955, when he scored 46 goals and was named to the league's First All-Star team.

The following season his rights were purchased by the New York Rangers of the NHL, for whom he played for eight seasons. He scored twenty goals or more in five of those seasons, his best year coming in 1958–59, when he scored 33 goals and 29 assists.

Known as "Spud" because of his love for potatoes, Hebenton was a hard-working, clean player who averaged only nine penalty minutes per season.

After the 1962–63 season, the Boston Bruins acquired Hebenton in the waiver draft, for whom he played his final NHL season. Hebenton's rights were sold by Boston after the 1963–64 season to the Portland Buckaroos of the WHL, and he remained in Portland for the rest of the league's history (barring two seasons in Victoria once more), becoming one of the WHL's all-time leading scorers and perennial stars, and never once missing a game. He was a perennial winner of the Fred Hume Cup for gentlemanly play, winning it nearly half the seasons it was offered, the final time when he was 43 years old.

When the WHL folded in 1974, Hebenton played four games for the Seattle Totems in the Central Hockey League to wrap up his professional career, having played 26 professional seasons in all, a mark exceeded only by Gordie Howe in Hockey history. He played two seasons for a version of the Buckaroos in semi-pro leagues before hanging up his skates for good.

Hebenton's remarkable consecutive games streak lasted at least from the 1952 season through to the end of the 1967 season—he missed three games in 1951 for the Victoria Cougars and two games in 1966/67 with the Victoria Maple Leafs so the streak was likely longer—for an unrivalled total of at least 1,054 consecutive games. By contrast, Doug Jarvis' professional streak—the second longest in history—is 988 games.

Hebenton's son Clay was a professional hockey goaltender between 1973–1980, most notably as the starting goaltender for the World Hockey Association's Phoenix Roadrunners in the 1977 season. It was the first time a father and son were active in professional hockey at the same time, followed by Gordie Howe and his sons Mark Howe and Marty Howe in the WHA in 1974.