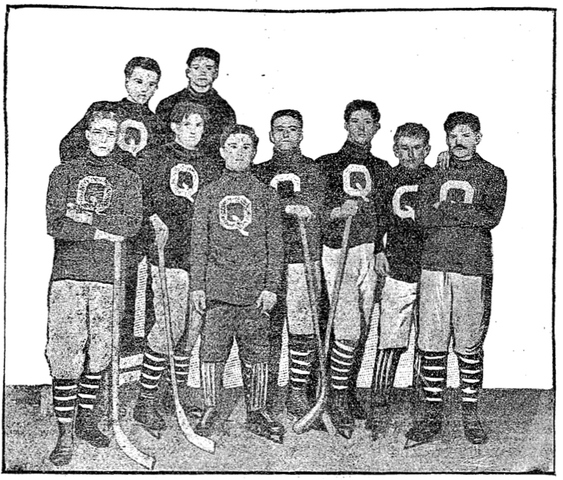 Newspaper photo of the Quaker City Hockey Club of Philadelphia, a 1900–01 season member of the American Amateur Hockey League.

The Quaker City Hockey Club only played one season in the AmAHL, in 1900–01, and finished in 6th and last place in the league standings with two wins, eight losses and one tied game. The team played its home games at the Ice Palace in Philadelphia. In a newspaper report from a 1900–01 league game against the Brooklyn Skating Club it was reported that the team played in maroon colors.

The biggest star player on the Quaker City Hockey Club team was team captain and forward George Washington Orton [1873–1958], a middle distance runner originally from Strathroy, Ontario who ran succesfully for the University of Pennsylvania. Orton had a withered arm as a result of a temporary paralysis in his childhood years, stemming from an accident where he fell out of a tree, and because of that he could only use one arm properly when handling a hockey stick. Nonetheless he scored 8 goals in 11 games for the Quaker City HC in the 1900–01 AmAHL season. Right winger Devine also scored 8 goals for the team during the season.

Another famous player on the 1900–01 Quaker City HC team was William Jackson Clothier [1881–1962], a cover point from Swarthmore College who would go on to win the 1906 US Open tennis tournament.