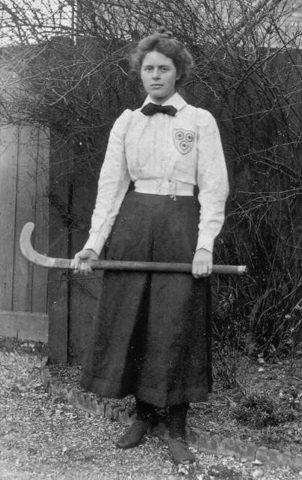 Marjory Surtees Phillpotts (Gosset) - Born May 27, 1879 in Bedford, England – Died December 12, 1965 in Oxford, England was a field Hockey player, selector and secretary for the Umpires Association.

Phillpotts learned her Hockey in her hometown of Bedford, later playing for the Bedford Hockey Club.

Phillpotts first represented England in 1900, and captained the England team against Ireland in 1903.

Phillpotts later married William Sealy Gosset on January 6, 1906 at St James in Tunbridge Wells, Kent and they moved to Dublin, Ireland where Gosset would become the head brewer for the Guinness brewery.

In addition to her playing career Marjory was a selector for the Leinster Hockey Association and Ireland Hockey and was honorary secretary for the Umpires Association.

NOTE
Marjory captained the national teams of both England (Phillpotts) and Ireland (Gosset) at different times in her career.