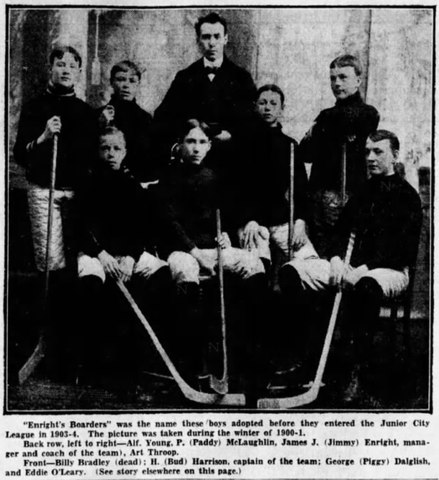 Jim Enright's Boarders (or Ottawa Boarders) from Ottawa in 1900–1901. This team, managed by Jim Enright, played at the Victoria Rink in Ottawa and switched name to Ottawa Victorias for the 1901–02 season.

The Ottawa Victorias would later play in the Federal Amateur Hockey League (FAHL) between 1905–1908 where they were involved in a game against the Cornwall HC on March 6, 1907 where Cornwall's forward Owen "Bud" McCourt was clubbed to death by players on the Ottawa Victorias (main perpetrator being Charles Masson).

The next season, in 1907–1908, the Victorias appeared in a Stanley Cup challenge series against the Montreal Wanderers of the ECAHA. The series over two games on January 9 and 13 1908 at the Montreal Arena ended in two decisive defeats for the Victorias: 3-9 and 1-13 (4-22).

Of the players on the 1900–1901 Enright's Boarders Art Throop would go on to have the longest career and after he left the Ottawa Victorias after the 1906–07 season he played in Pittsburgh (in the WPHL), with Brantford (in the OPHL), with Haileybury (in the NHA and the TPHL), with the Toronto Tecumsehs (of the NHA), and with the New Westminster Royals and the Portland Rosebuds (of the PCHA).