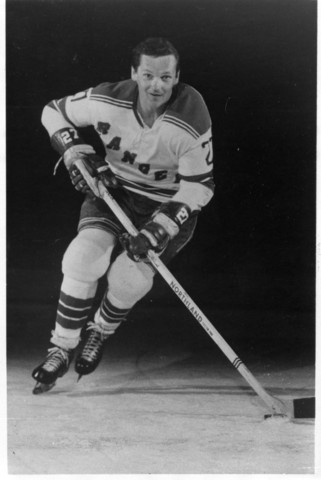 Irvine joined the St. Boniface Canadiens of the Manitoba Junior Hockey League in 1961. As a rookie he chipped in 6 goals and 13 points, but the following year he led the whole league in goals with 31 in just 32 games!. By 1963-64 he captained the Canadians, but wound up with the MJHL Winnipeg Braves by mid season.

A Boston Bruins prospect, Ted ended the 1963-64 season with a trial stint in the pros, including his first game in the National Hockey League!

Because the league was still a 6 team league, it was extremely difficult for players to break into the league until expansion finally came in 1967. As a result Ted spent the next 3 years in the minor leagues. All three years were spent in the CHL - one with the Minneapolis Bruins and two with the Oklahoma City Blazers, where Irvine won two successive CHL championships in 1966 and 1967, and in 1965-66 led all playoff scorers with 6 goals!

Ted's big NHL break happened on June 6, 1967. That was the day of the NHL expansion draft, as the NHL's six new teams stockpiled their rosters with basically minor leaguers and role players from the Original Six teams. Ted was selected by the Los Angeles Kings, and his minor league days were over.

Ted brought his his hard hitting, spirited play to the Californian coast and was an instant hit. The press nicknamed him the "baby faced assassin," a great metaphor for his kamikaze style of bodychecking.

Ted and the Kings had two really good years to start off their NHL careers, but by year three the team was really struggling. Ted too wasn't having as strong a season. In order to help rectify the Kings poor season, Ted was traded to the New York Rangers in exchange for Real Lemieux and Juha Widing on February 28, 1970. Irvine played a strictly defensive role at first, but soon was placed on a line with Pete Stemkowski and Bruce MacGregor where he got more ice time.

In New York Ted was noted to do "The Irvine Shuffle" - a celebratory dance when he scored a goal. He was able to dance a career high 26 times in 1973-74. He also added 20 assists for a career high 46 points.

Ted spent the next 5 full seasons in the Big Apple. An outstanding team player, Ted was extremely popular off the ice too. In 1974 he received the Hockey writers "Players Player Award." A year later he was honored with the NY Ranger team award for charitable work. The "Conacher Award" was given to him for his work with handicapped children.

In the summer of 1975 Ted was traded with Bert Wilson and Jerry Butler to the St. Louis Blues in exchange for Bill Collins and goalie John "JD" Davidson. It was with the Blues that Ted spent his final two NHL seasons.

Irvine amassed a total of 331 points in 774 games played over a 15-year professional career.