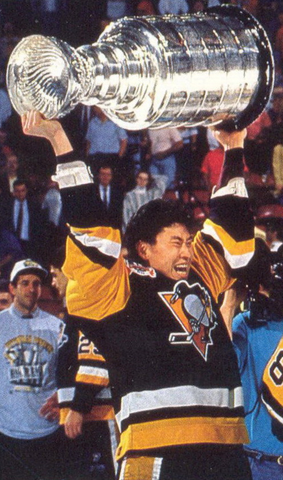 Paek is the first Korean-born Hockey player to both play in the NHL, and have his named engraved on the Stanley Cup.

Paek played his junior Hockey for three seasons with the Oshawa Generals (1984–85 to 1986–87) of the Ontario Hockey League / OHL. Paek would captain the Generals, who set a team record of 101 points in the 1986-87 season, won the OHL championship (J. Ross Robertson Cup), and appeared in the Memorial Cup championship game, losing to the Medicine Hat Tigers.

Paek then played for the Muskegon Lumberjacks of the International Hockey League / IHL for three seasons - 1987–88 to 1989–90, where the Lumberjacks won 2 division titles and 2 regular season titles (Fred A. Huber Trophy) in 1989 & 90, and they won the IHL league championship (Turner Cup) in 1989.

Paek would then play for the Pittsburgh Penguins of the National Hockey League / NHL who had drafted him in the ninth round, 170th overall, in the 1985 NHL Entry Draft.

Paek's NHL career began with the Penguins in 1990–91. Upon entering the league, he became the first Korean-born Hockey player to ever play in the NHL and since he was part of the Penguins' Stanley Cup run of 1990–91, he became the first player of Korean descent to have his name engraved on the Stanley Cup. Paek scored a goal in the championship game 6 - assisted by Mario Lemieux.

After four seasons and two Stanley Cups in Pittsburgh, Paek was traded mid-season to the Los Angeles Kings in 1993–94 as part of the deal that brought Tomas Sandström to the Penguins. After only 18 regular season games as a King, he moved on, signing with the Ottawa Senators for the 1994–95 NHL season.

After only 29 games with the Ottawa Senators in 1994–95, he left the NHL and began play in the International Hockey League / IHL again, playing from 1995 to 2000, where he played for the Houston Aeros, Minnesota Moose, Manitoba Moose, and Cleveland Lumberjacks.

Paek would then play in England for the Nottingham Panthers of the British Ice Hockey Superleague / BISL from 2000 to 2002. During his time in England, Paek would join the Anchorage Aces of the West Coast Hockey League for 40 games.

Paek would retire as a player after the 2002 season.

After retiring from play, Paek coached the Orlando Seals of the World Hockey Association 2, guiding the club to a 27–25–5 in 2003–04, and coaching in the league's all-star game.

In 2004, Paek served as an assistant coach for the St. Edward High School, leading the team to an Ohio state championship. While coaching at St. Edward, he also served as a co-coach of the Cleveland Panthers bantam minor squad, leading them to an Eastern Elite Amateur Hockey League title.

On August 11, 2005, Paek was named the assistant head coach for the Grand Rapids Griffins of the American Hockey League / AHL. Paek helped guide the Griffins to their first Calder Cup championship in 2013, the American Hockey League's regular season championship (Macgregor Kilpatrick Trophy) in 2005-06, and a cumulative record of 357–272–33–46 (0.560) during his nine seasons. Paek was the longest-tenured coach in franchise history, having served as the assistant coach for nine seasons.

On July 23, 2014, it was announced that Paek accepted a position as the director of Hockey for the Korea Ice Hockey Association (KIHA), and head coach of the South Korea men's national ice Hockey team. Under Paek's leadership, South Korea will attempt to earn its first-ever Winter Olympic Hockey qualification to the 2018 Winter Olympics, set to be held on home soil in Pyeongchang, South Korea.