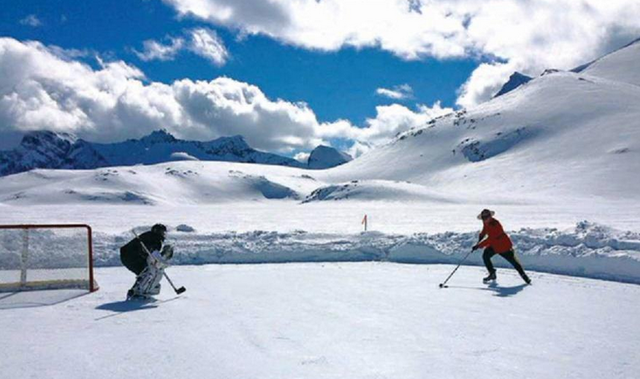 RCMP in Full Uniform Playing Pond Hockey on a Purcell Mountain Glacier 2015
The Mounties always get their goal.

"I'm actually very surprised...my thought was to take a photo of myself in serge with my personal camera for a personal screen saver, maybe a Christmas card," said Cpl. Shaun Begg, who is stationed in Kaslo, B.C.

"I had no idea it would hit the internet and just explode."

Begg plays recreational Hockey with Kaslo's Afterburners and had an opportunity to fly by helicopter into a remote area of the Purcell mountains to play shinny with his teammates and a few others.

He and his teammates played for four hours at 9,000 feet before he put on his uniform, with his supervisor's approval.

"When I got to put the serge on it was a proud Canada moment," he said.

"The scarlet tunic has magic in it and the opposing team just came up and they wanted photos and stuff like that so it was kinda neat. So I kinda knew at that point that it might get out."

"Time kinda stood still while we were up there. It was a surreal experience. I'm still basking in the glory of what we've accomplished, not the photo but actually getting to play, in a ... I mean how much more Canadian can that get ... to play pond Hockey at 9,000 feet."

Classic Canadian Ice Hockey Photo on a Purcell Mountain glacier just outside of Invermere, BC