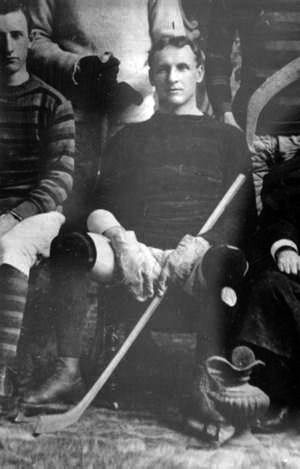 Guy Curtis was captain of the Queen's Ice Hockey Team. Twice the team challenged for the Stanley Cup in 1895 and 1899. Queen's played in ten Ontario Senior Hockey Championships, winning five

The rarely-used third verse of Queen's Oil Thigh song calls on students to "Remember Captain Curtis and the conquerors of Yale." Curtis was one of the most famous figures in Queen's and Canadian athletics at the turn of the century.

Curtis was a two-sport star who led Queen's to a dazzling array of national, provincial, and intercollegiate titles in football and Hockey at a time when the university played not in college leagues but against the very best teams in Canada and even the U.S.

He led Queen's to a Canadian football title in 1893 and his Hockey teams appeared in two Stanley Cup finals around the turn of the century. The "conquerors of Yale" mentioned in the song were members of the Hockey team of 1897 who beat Yale for the unofficial title of intercollegiate champions of North America.