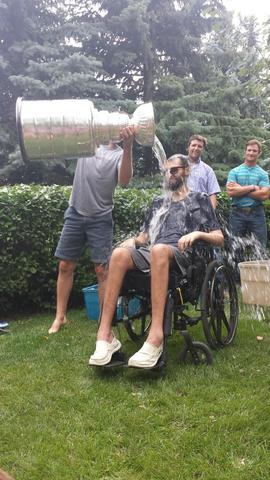 Ryan Van Asten pours a Stanley Cup bowl full of water and ice over his buddy Kyle on August 15, 2014 in Alberta.

Ryan is the 1st to use the Stanley Cup in the ALS Ice Bucket Challenge, that is becoming very popular this summer.

Ryan & Kyle - YOU BOY'S ARE THE BEST ! Real Hockey Gods
We would call you winners, but the true winners are EVERYONE who is raising millions of dollars for various organizations that help with ALS - Lou Gehrig’s Disease and other forms of cancer.

Ryan Van Asten is also a Winner / Champion, as he was the strength and conditioning coach of the NHL’s Los Angeles Kings for three seasons, winning the Stanley Cup in 2012 & 2014. He also worked for Hockey Canada, and was part of the gold-medal winning 2010 Woman’s Hockey team. Van Asten also played for Queen's University Hockey Team.

The ALS Ice Bucket Challenge traces it's origins to University of Arizona women’s basketball coach Niya Butts, who made the Cold Water Challenge popular earlier this summer in hopes of raising awareness and money for breast cancer research. Then former Boston College baseball player Pete Frates heard about the idea from fellow ALS patient Patrick Quinn and got his friends and family involved.

The 29-year-old Frates is suffering from the disease and no longer has use of his arms or legs.

“Pete’s story is so compelling: The handsome, strong, big-time college athlete that gets stricken down by a disease that no one knows its cause, there is no effective treatment, and there are so many people like Pete that are going and experiencing this disease privately because as it takes them physically, they no longer put themselves out there,” his father John said in a phone interview. “But my son is different. He said, like most jocks do, ‘Let’s strap this thing on and get after it.’ ”

The Frates family considered it a fun bit to have friends pour buckets of ice over their heads in private appreciation of Pete’s battle. But the movement became public when one of Frates’s high-school hockey teammates challenged Gregory Campbell of the Boston Bruins.

Soon, there were more highlights of Bruins players, coach Claude Julien and president Cam Neely dumping ice on their heads.

Down the line it went, through the Bruins, Stars, Tampa Bay Lightning, Pittsburgh Penguins and other NHL organizations. In the past couple of days, Chicago Blackhawks coach Joel Quenneville and CEO John McDonough have joined in, and former Toronto Maple Leafs centre Mikhail Grabovski nominated Leafs coach Randy Carlyle — a Walk for ALS Canada supporter — to go next.

It just shows the camaraderie within the NHL family, kind of like the brotherhood, if it’s ex-players or coaches or management or whoever,” said Peverley, who is still progressing after a heart ailment caused him to collapse during a game in March.

“It shows that guys are willing to do whatever they can to help out an organization, some people that need help.”

When videos started showing up less than two weeks ago, John Frates said his son Pete had no trouble watching every single one. Pete wanted to use his eye-tracking software to like or comment on each one — but soon, there was one every 20 seconds.

“We can’t even keep up,” Frates’s father said. “We’ve just seen the highlights, like Justin Timberlake just came in a little while ago. It’s just nuts.”

He said the growth of the Ice Bucket Challenge has been overwhelming to the family, which didn’t even want it to be a fundraiser when it started.

“One is we only wanted it to be an ALS awareness campaign, and it was really originally for fun,” he said. “Somebody a lot more clever than we are decided it should also have a fundraising component.”

A spokeswoman for ALS Association in the U.S. said the national office has raised $1.35 million from July 29 to Aug. 11, compared to $22,000 for the same period last year, and that wasn’t including local chapters. A spokeswoman for ALS Canada didn’t have specific figures but said in an email that a lot of the money coming in from the Ice Bucket Challenge is from new donors.

Stars owner Tom Gaglardi and the team’s charitable foundation donated $20,000 earlier this week. When Leafs forward James van Riemsdyk tweeted his video, he added a link to the ALS Association to encourage donations.

Free-agent tough guy Paul Bissonnette, whose memorable video posted Tuesday included a helicopter dropping gallons of glacier water on him, also had links to U.S. and Canadian websites where viewers could donate money to the cause.

“If one person sees the video and decides to donate, I think that’s great,” Peverley said.

Many ALS organizations that have called the Frates family to ask what they had done to increase donations to 10 times the norm. It’s his hope that 75 years after Gehrig’s death real progress will be made in research of the disease.

“Now that we’ve created this amazing achievement of awareness, what happens next? We can’t allow this movement to just go back to the same old, same old,” Frates said. “It’s a godsend that this has happened. Our only hope and prayer is that there’s a treatment that comes out of it. We’re not so greedy as to hope for a cure, although that would be the greatest thing.”