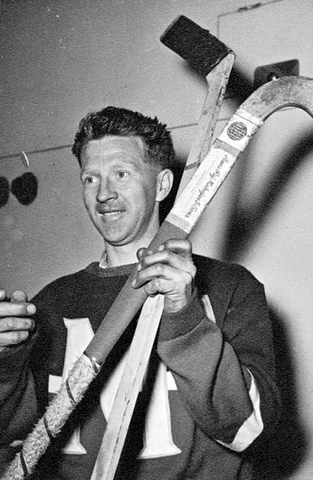 Benjamin Maxwell Acton was born July 12th, 1927 at Footscray hospital in Victoria. He was educated at ex-Geelong Rd State School and Footscray Technical College. His father, Clifford James Acton, was the son of Benjamin Acton (1875–1936) whose parents Robert Acton and Jane William had married in Victoria in 1864. Robert immigrated from Britain to Port Phillip on Abdalla in 1853 with Thomas Acton, age 22. Benjamin Sr lived at 81 Droop Street, Footscray, in 1916 and died at Fitzroy in Victoria in 1936. Ben Jr became a plumber like his father and grandfather before him. He was named after his grandfather who had originally established the plumbing business.

Acton lived at 11 Droop Street in Footscray and then Main Road, St Albans after he married. He trained in the Victorian Football Association (VFL) as a young man with the Footscray Football Club (now AFL Western Bulldogs). Acton's sister Joyce (later Joyce Wilms) encouraged him to take up both skating and Hockey. He went on to become Captain of Australia at age 32 in the 1st Australian Olympic Ice Hockey Team, Squaw Valley USA, and the 1st and 2nd World Championship teams. He was invited to the 1964 Olympics but declined because of business commitments.

Acton played local club ice Hockey with the VIHA Wildcats IHC which he captained after Alf Massina (son-in-law of Ted Molony). His father Cliff was the Trainer of the Wildcats when Ben was Captain and Coach. Acton transferred to VIHA Monarchs from 1954 where he won the club's Best & Fairest award twice, and the trophy for the most assisted goals (1959). Naturally ambidextrous, Bud McEachern taught him skills that made better use of this ability, and McEachern soon became his ice Hockey mentor.

St Moritz rink at St Kilda had opened in 1939 for just one season before Hockey was suspended for six seasons due to the war. The Glaciarium Board led by Cyril MacGillicuddy had decided against ice Hockey when war was over, and St Moritz hosted all VIHA competition. Although ice Hockey practice had continued at the Glaciarium during the war years, it was not until 1948 that Molony convinced the Board to resume competition Hockey there. As a result, the breakaway Victorian Ice Hockey League (VIHL) formed there for the three seasons between 1948 and 1950, and a fierce competition resumed between St Moritz and Melbourne Glaciarium. The Wildcats home ice was the Glaciarium, and so they competed in the VIHL. VIHL players could not compete for the Goodall Cup, only players in VIHA clubs with home ice at St Moritz rink. Acton represented Victoria after the VIHL merged with the VIHA in the 1954 and 1955 Goodall Cups. Victoria won both of these series. Cliff Acton also represented Victoria as a trainer in the 1951 Goodall Cup which Victoria also won. Ben played field Hockey that season.

In 1960 Acton was nominated captain of both the Olympic field Hockey team to compete in Rome, and the Olympic ice Hockey team to compete at Squaw Valley, California. However, he could only afford to participate in one event. An old newspaper clipping (above) shows an unshaven Ben Acton tossing a coin to decide! His son Garry wrote recently: "... of course there was never any choice really, Dad's first love was Ice Hockey. I always remember attending the 25th Ice Hockey Reunion in Melbourne with Dad and Julius (Judy) Patching praising Dad's efforts. Judy said, "I have seen many Olympic Champions over the years, Dawn Fraser, Herb Elliott, Ron Clark to name a few, but I have never seen anyone like Ben. He would attend an Australian Field Hockey Training session and immediately drive to the Olympic Ice Hockey Training session and participate there as well." " Garry believes Ben Acton is the only person in the world to have represented his country in both Field Hockey and Ice Hockey. Acton wore jersey No 8 at the 1960 Olympics.

Acton won the Footscray Hockey Club Best and Fairest award for ten years straight from 1947 to 1956. Humbled by the decade of honors, he remained on the team but requested he no longer be included in the voting to allow team mates to shine. Acton coached from 1949 – 1958 at Footscray Hockey Club, a reign that delivered two State League Premierships. Ben was vice captain of the Australian Men’s field Hockey team in 1950, 1952 and 1954 and carried the torch at the 1956 Olympic Games in Melbourne. He was chief ice Hockey umpire at the 1956 Olympics and played field Hockey for Victoria for 15 years. Ben donated the jumper he proudly wore when representing Australia in the 1950s to Footscray Hockey Club. It is on display in the memorabilia cabinet of the FHC clubroom in Yarraville.

Ben Acton was one of the smallest top-class players in ice Hockey of his time, weighing in at just 67 kg (10.5 stone). He competed during the boom years of the sport when some players spent 100 penalty minutes or more in the "cooler" in one season. Acton had been sent off for a total of just 14 minutes in his first 11 years of the game; 7 minors in 11 seasons! "Acton Reserve" in the Footscray Gardens is named in his honour. Ben was made a Life Member of Ice Hockey Australia in 2000, along with all members of the 1960 Olympic Ice Hockey Team. Ben had two children, Jenny and Garry. His 1960 Olympic ice Hockey jersey was donated by his son Garry to the Australian Gallery of Sport and Olympic Museum at the Melbourne Cricket Ground (MCG).