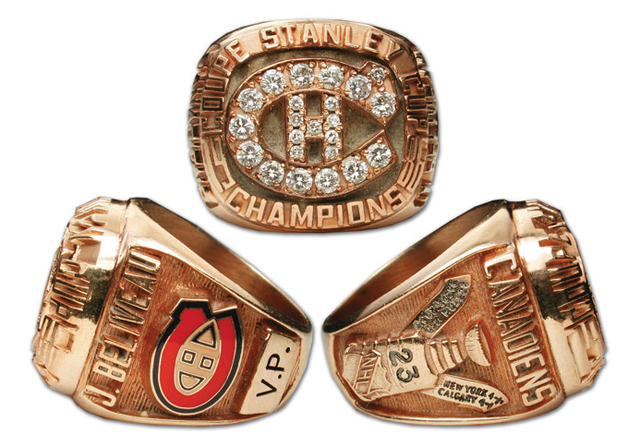 An invaluable member of the Montreal Canadiens organization for some 50 years as a player and then executive, Vice-President of Corporate Affairs Jean Beliveau added this formidable memento to his collection after the Canadiens won the franchise's 23rd Stanley Cup in May of 1986. You guessed it; there are 23 diamonds set into the Canadiens logo on the face of this dazzling creation. Encircling them are the words "Coupe Stanley Cup Champions", with "19" and "86" also incorporated. One shank features a raised image of the Stanley Cup on which the NHL logo and "23" appear. "Canadiens" is above and banners to the sides diagonally list the Canadiens victims (Boston, Hartford, New York and Calgary) and the series' results. An enameled Habs logo graces the other shank, along with "J. Beliveau" above and "V.P." below.