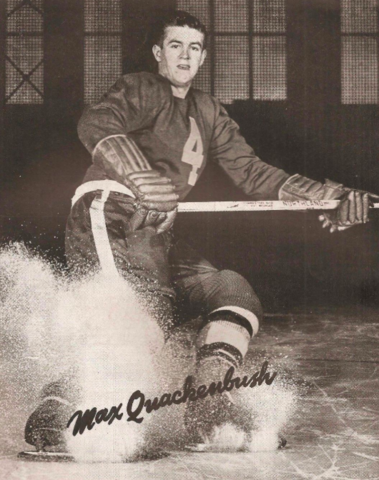 Quackenbush first made a name for himself playing high school Hockey for De La Salle College ("Oaklands") in Toronto. He spent 3 years there, as one of the top defensemen, before playing his final year of junior Hockey with the Windsor Spitfires in 1947-48, and turned pro during the season with the Windsor Hettche Spitfires, helping the team to the championship finals of the 1948 IHL Turner Cup.

Quackenbush then join the Omaha Knights of the United States Hockey League for the 1948-49 season, before jumping to the American Hockey League, and playing 2 seasons with the Indianapolis Capitols. While in Indianapolis, Quackenbush was loaned the the Boston Bruins on December 5, 1950 for the rest of the season. Boston General Manager Art Ross's move allowed Max to realize his dream of playing in the NHL with brother Bill. Max would play 47 games that season, registering four goals and six assists, while also getting in 6 playoff games.

Quackenbush was then traded to the Chicago Black Hawks on September 18, 1951 for Doug McCraig, this after starting the year with the AHL's St. Louis Flyers. Quackenbush would play his final NHL games that year. In 14 games with the Black Hawks, during the 1951-52 season, he would be credited with one assist.

Quackenbush spent the next three seasons of his professional career with the Western Hockey League's Calgary Stampeders. He would be claimed by Chicago in 1954 in the Inter-League Draft but he did not see any action with the Black Hawks. Chicago would then trade him to Montreal on July 3, 1955 only to have the transaction nullified when Quackenbush announced his retirement July 15, 1955.