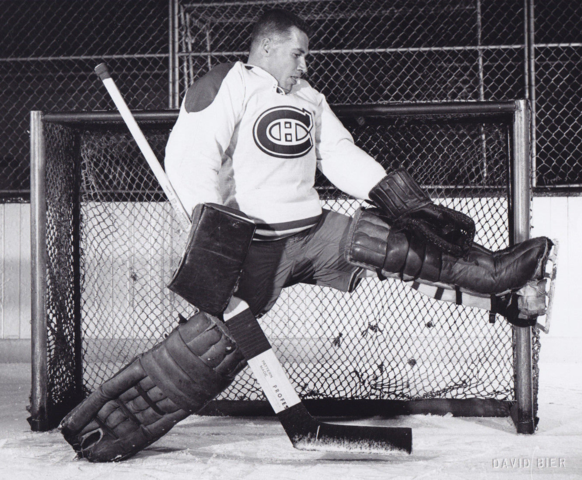 McNeil starred with the Montreal Royals of the Quebec Senior Hockey League, earning the best goals against average in the league in both 1945-46 and '46-47, being named the first team all-star in 1947, '48 and '49 and was chosen the league's most valuable player three years consecutively -- 1947, 1948 and 1949, winning the Byng of Vimy award.

McNeil and the Royals won the Allan Cup as champions of Canada in 1947.

McNeil was called up from the Cincinnati Mohawks in March 1950 when Bill Durnan was hit in the head with a skate blade. Goalies did not wear masks at the time and were expected to play every minute of every game. McNeil recorded a 1.50 GAA (goals against average) over six games and preserved Durnan’s sixth and final Vezina Trophy (then awarded to the goalie of the team with the fewest goals against). This rookie performance earned him “the Schaefer player of the week” award. Durnan returned but felt he had lost his edge, so he announced that he would not suit up for a playoff game against the Rangers. At first McNeil refused to take what he considered to be “Bill’s spot,” so Durnan was asked to talk to his understudy in a private part of the Forum dressing room. Both men shed tears, as the “torch” was passed down. McNeil then succeeded Durnan who announced his retirement shortly afterwards.

Too small to cover much of the net if he remained in his crease, McNeil compensated with geometry and reflexes. He played the angles, advancing towards oncoming forwards and giving them less mesh to shoot at. It worked well for him and the Canadiens made the Finals every season he was with the team.

Reliable and tough enough to play through injuries that would sideline some of today’s goaltenders, McNeil performed fearlessly through the regular schedule and stepped it up in the postseason. His clutch performances helped him become one of the stingiest netminders of all time.

McNeil actually played every game for the Canadiens from March 1950 to November 1952 (this streak included two entire 70-game seasons, 1950–51 and 1951–52). In the ’51 playoffs, McNeil went 214 minutes of shutout Hockey against the powerful Red Wings in a stretch that included two marathon overtime games—both at the Detroit Olympia. Thirty eight of his sixty two saves in Game One were made in extra time, a performance that prompted Jack Adams, the manager of the Red Wings, to remark, “It was like running into one-hit pitching your first time out. The greatest goalkeeping this team ever faced.” The Canadiens managed to win both games on overtime goals by Maurice Richard and a stellar performance by McNeil, who was dubbed by the Detroit press, “the magician.” When the Canadiens went on to eliminate the heavily favored Red Wings, their coach, Tommy Ivan, remarked, “Gerry McNeil was the difference. He was terrific in their net.

In the 1951 Stanley Cup finals, he lost when Bill Barilko pinched in from the blue line and scored from a scramble. The 1951 Finals remain the only best-of-seven series in which every game had to be decided in overtime. Barilko’s goal became famous due to the Turofsky picture, and the fact that Barilko would die in a small-plane accident the following summer.

McNeil recorded 10 shutouts in the 1952-53 season. He had to be good for the Canadiens to succeed since they only scored 155 goals in 70 games (or 2.21 GPG). The last game of the regular season was against Detroit at the Olympia, and with 49 goals, Gordie Howe was set to match and perhaps beat Richard’s record of 50 in a season (actually 50 in 50 games in 1943-44). Howe had five shots against McNeil that night but he couldn’t beat the Canadiens goalie who was heard telling Richard when the game ended, “well Rock, he’ll have to start over at one again.” McNeil’s Stanley Cup victory a few weeks later vs Boston, was immortalized in Wayne Johnston’s novel, The Divine Ryans.

Towards the end of the 1953-54 season, McNeil lost his starting position to a young Jacques Plante. When the Canadiens were facing elimination against Detroit in the 1953-54 Stanley Cup finals, Plante was pulled by coach Dick Irvin in favour of the veteran McNeil. The Canadiens promptly won the next two games to force a seventh game. Unfortunately, Tony Leswick's overtime fluke goal undid the Canadiens, as an easy shot by the Red Wings was tipped off Canadiens defenceman Doug Harvey's glove behind McNeil. A crushed McNeil retired for one season and coached junior Hockey, but he would return to the nets yet again.

After sitting out the 1954-55 season, McNeil returned to professional Hockey with the Montreal Royals in the 1955-56 season, and would even return to the Canadiens in 1956-57, getting his name on the Stanley Cup for a second time. Jacques Plante was injured during 1956-57 and McNeil was called up to the Canadiens for 9 games of unexpected play.

McNeil then played two seasons with the Rochester Americans before finishing his professional career where he was born, Quebec City, playing for the Quebec Aces.

Perfectly bilingual, McNeil, whose paternal Quebec roots can be traced back to 1779, always felt part of the Canadiens’ family. Aside from a year in Cincinnati and two more in Rochester, he lived his entire life in the province of his birth, the last forty years in Montreal where he was a regular participant at Canadien oldtimer and alumni events.