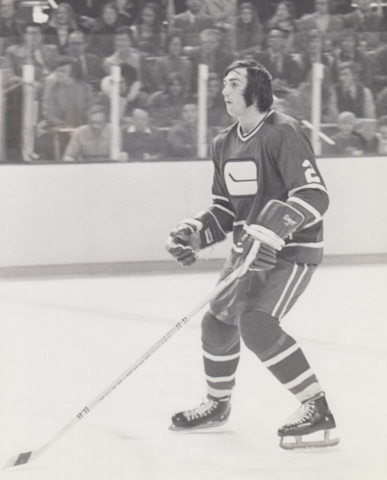 Guevremont started his junior Hockey career in 1967 with the Laval Saints of the Quebec Junior Hockey League.

The 1969-70 season was almost a repeat of his 1st season, this time scoring 13 goals and 45 assists in the regular season, and 5 goals and 21 assists in the playoffs, where he again helped the Junior Canadiens win back to back Memorial Cup championships.
Guevremont was named to the OHA Second All-Star Team in 1970.

Guevremont played 1 more year foe the Junior Canadiens, and increased his scoring to 22 goals and 66 assists and was awarded the Max Kaminsky Trophy in 1971 as the most outstanding defenceman in the OHA, and was named to the OHA First All-Star Team in 1971.

The newly-formed Vancouver Canucks made the young rearguard their first-ever amateur selection in the 1971 Amateur Draft. And although he lacked defensive skills during the early going, he applied himself steadfastly to balance his game. The 6-foot-2, 202 pounder showed his skills early, setting a then-NHL record for points by a rookie D-man in a season with 51 in 1971-72.

Guevremont was a highly touted 21 year old Hockey player when he got invited to Team Canada '72. There was a little known rule that each of the three Canadian NHL teams at the time had to be represented by two players. There wasn't much of a problem selecting worthy players from Toronto and certainly Montreal. But the Vancouver Canucks were just a young expansion franchise with no real star players. As a result, highly regarded Dale Tallon and Jocelyn Guevremont got the nod to play for Team Canada.

But Team Canada's defense was stacked even with the injury problems, and once the series proved to be closer than any Canadian had predicted, Guevremont was told he wouldn't get a chance to play in the series.

As an offensive specialist, Guevremont continued his industrious efforts to shore up his defensive game. The results came to fruition after his trade to the Buffalo Sabres on October 14, 1974. There he succeeded in maintaining his offensive output while landing on the positive side of the plus/minus scale year in and year out.

Guevremont lasted with the Sabres until 1979. At that time, he was traded to the New York Rangers on March 12, 1979. In the Big Apple, however, Guevremont saw only limited action, spending much of his time in the press box watching new recruits make rookie mistakes. He was finally sent down to the New Haven Nighthawks of the AHL, where he scored 7 goals and 27 assists in 36 games.

Guevremont retired at the close of the 1979-80 season.

Sourced from hotcorner2980 - ebay.com. Credited to Robert B. Shaver.