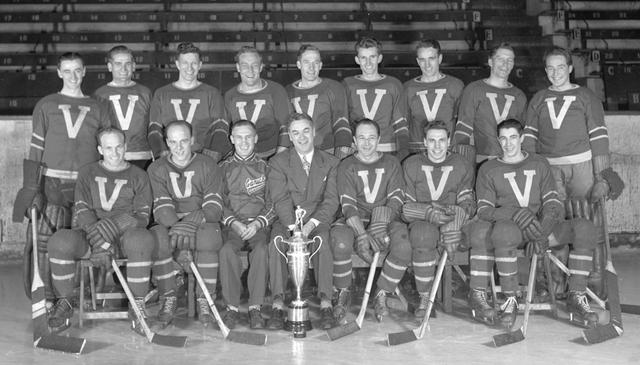 The Canucks’ roots stretch back to the summer of 1945. Owner Coley Hall won the franchise rights in a poker game. Out for a mid-summer stroll, Hall’s bookie Arthur Rennison suggested the ‘Canuck’ moniker as a nod to wartime comic book character Johnny Canuck. Ever since, the Canucks name has symbolized professional Hockey in British Columbia.

Playing in the Pacific Coast Hockey League one tier below the NHL, the inaugural Canucks were a ragtag team of returning servicemen and inexperienced youngsters under coach Paul Thompson, a three-time Stanley Cup winner with Chicago.

Wearing blue, white, and red the Canucks won the PCHL’s Northern Division with a 37-21 record, scoring an average of five-and-a-half goals a game. The team featured the PCHL’s leading scorer: ‘Handy’ Andy Clovechok, who compiled 56 goals and 103 points. Besides Clovechok, three other Canucks cracked the PCHL’s top-ten scorers that season: Andy Bathgate’s older brother Bernie, as well as Alex Pringle and Bill Carse. It should also be noted the team’s entire payroll totaled less than the $16,000 the lowest paid Canuck made in the club’s inaugural 1970-71 NHL season.

In a seven-game final series, the Canucks defeated the Southern Division winner Hollywood Wolves 4-1 to be crowned PCHL champions. The Wolves featured future Toronto Maple Leaf Bill Barilko, who scored the 1951 Stanley Cup clinching goal, disappeared in a place crash that summer, and is immortalized in a Tragically Hip song today.

From there, the Canucks challenged the Eastern Hockey League champion Boston Olympics for the United States Amateur Championship. The Olympics were laden with future NHLers: two Hockey Hall of Famers in Allan Stanley and Fern Flaman, as well as Clare Martin, Pete Babando, Pentti Lund, and Harvey Bennett.

By this point, Vancouver had gone berserk for Canucks hockey. Line-ups at the Hicks Ticket Bureau wicket snaked down Dunsmuir Street from Seymour to Granville and up to Georgia. People camped out overnight on the street to buy tickets.

In an epic seven-game series played entirely at the Vancouver Forum, the Canucks found themselves down 3-1 through four wildly entertaining games, in which the two teams combined for forty-five goals.

Overcoming several injuries, the Canucks battled back to even the series and force a deciding seventh game. In the third period of game seven, Canucks winger Pringle snapped home the winning goal to defeat the Olympics 6-3 and capture the Walter A. Brown Cup. In the process they became the first and only Canadian team to win both the PCHL championship and United States Amateur Championship.

The Vancouver Canucks won six President's/Lester Patrick Cups (the trophy was renamed in 1960 after the death of Lester Patrick), two PCHL titles (1946 and 1948) and four WHL titles (1958, 1960, 1969 and 1970). They were also regular season champions four times. They played home games in the PNE Forum arena at the Pacific National Exhibition in east Vancouver, before moving for their last two seasons into the Pacific Coliseum just to the north.

Sourced from http://www.vancouverarchives.ca/. Credited to Don Coltman and Steffens Colmer.