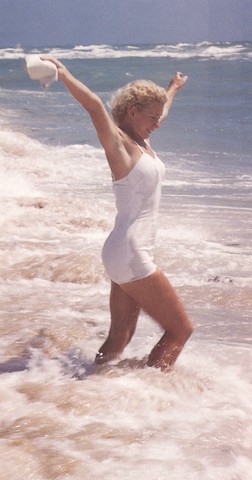 Colleen Joffa Howe (February 17, 1933 – March 6, 2009) was one of the founders of the Detroit Junior Red Wings, the first Junior A hockey team in the United States. She served as general manager for three years and formed Power Play International to manage Gordie, Marty and Mark's business interests. She registered her husband's name (Gordie Howe), nickname (Mr. Hockey), and her own nickname (Mrs. Hockey) as trademarks. She was instrumental in the construction of Michigan's first indoor ice hockey rink, named the Gordie Howe Hockeyland arena, located in the Detroit suburb of St. Clair Shores.

She was named Sportswoman of the Year in Detroit in 1972, followed by Michigan Sportswoman of the Year in 1973. The Colleen J. Howe Arena in Sandusky, Michigan was named in her honour. The Colleen & Gordie Howe Middle School, Abbotsford, British Columbia, British Columbia and the Howe Arena in Traverse City, Michigan are also named in their honour. Howe established the 65-city 65th birthday Gordie Howe tribute tour and the Howe Foundation which supported charities. Howe was also the proud recipient of the The Hartford Chamber of Commerce award for outstanding community achievement in 1979 - The Howe family—Gordie, Colleen, Mark, and Marty—received the Wayne Gretzky Award in 2000

Howe's most remarkable negotiation as sports agent occurred in 1973, when she brought Gordie out of retirement and arranged for Mark, Marty, and Gordie to all play together on the Houston Aeros. The three later played together for the Hartford Whalers - Colleen Howe wrote the book My Three Hockey Players published in 1975 which became her first venture into writing. The Howes and Charles Wikins collaborated on After the Applause (published in 1989), followed by When the Final Buzzer Sounds (published in 2000). A 20th Century Hockey Chronicle co-written by Howe and Gordie was published in 1994. And ...Howe!: An Authorized Autobiography was written together by the Howes and Tom Delisle and released in 1995. The final joint venture between Howe and Gordie was You Read to Me & I'll Read to You: 20th-Century Stories to Share which came out in print in 2001. Charities were supported by proceeds from the sales of her books