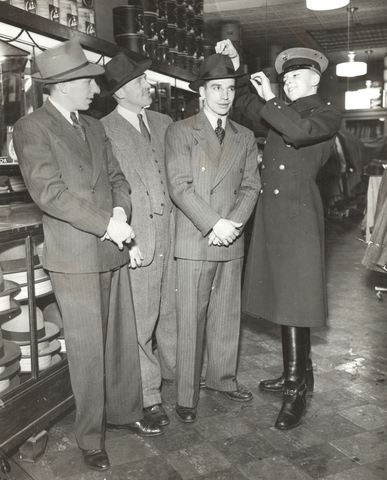 Chicago Black Hawks Max Bentley, Red Hamill and Doug Bentley. That’s young Bill McLaughlin playing shop assistant in livery — son of the Black Hawks’ owner, Major Frederic McLaughlin. The photo comes undated but it’s annotated with a key piece of information: Hamill and the Bentley boys were getting new hats in reward for recent hat tricks. That might make it the fall of 1942. November 8, Hamill scored all the Chicago goals in a 3-3 tie with Detroit. Doug Bentley’s got three on November 19, also against the Red Wings and their goaltender, Johnny Mowers. Paul Bibeault was in the Montreal net on December 5 when Max put three past him in a 5-2 Chicago win.