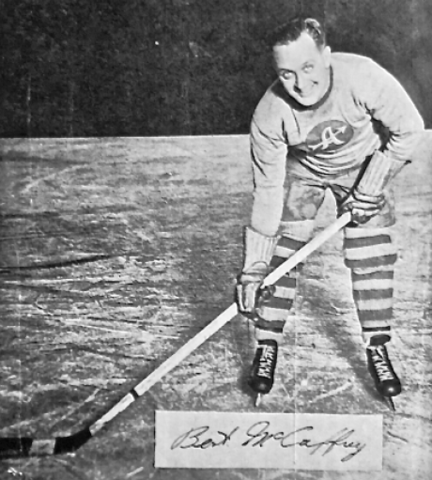 On October 16, 1924, McCaffrey signed as a Free Agent with the Toronto St. Pats, and played his first NHL game on November 29, 1924 at the Montreal Forum.

He scored his first NHL goal vs Hec Fowler of the Boston Bruins on December 3, 1924 at 18:15 of the 2nd in the Mutual Street Arena, Toronto.

McCaffrey was again traded this time to the Montreal Canadiens by Pittsburgh for Gord Fraser, December 23, 1929.

McCaffrey would help the Canadiens win the 1930 Stanley Cup championship. He scored just 1 goal in 6 playoff games, but it was a very important one in the final game of the playoffs, as Montreal defeated Boston 4-3 for the championship.

McCaffrey is also on pictures of the 1931 Montreal championship team, but he was sent down to the minors half way through the season and never played in the NHL again.

After retiring as a player, McCaffrey started a career as a senior amateur league referee and an NHL linesman.