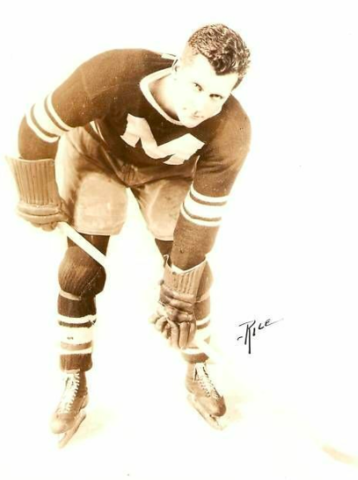 While studying for his law degree at the University of Toronto, Plaxton was a member of the Theta Delta Chi fraternity and the university Hockey team, on which he played from 1921 through 1925. After graduating, he was asked to play with the Toronto Varsity Grads ( three seasons), winning the 1927 OHA Senior A championship, then defeated Fort William to win the 1927 Allan Cup championship, and the right to represent Canada at the 1928 Winter Olympics in St. Moritz, Switzerland. Plaxton scored 21 goals, 5 assists in 11 Allan Cup playoff games.

The Toronto Grads were coached by Conn Smythe for the Olympic Games. Plaxton stirred up controversy when he threatened to boycott the games unless his cousin [Roger] and brother [Bert Plaxton] were added to the team. This threat was successful, even though it went against coach Smythe. Hugh Plaxton played 3 games for Canada, scoring 12 goals, including 4 goals in the final game, as Canada went undefeated in he tournament, winning the 1928 Olympic Gold Medal.

After the Olympics, Plaxton was pursued by Boston Bruins manager Art Ross and the Leafs' Conn Smythe, the latter offering “one of the largest salaries ever offered an amateur or any other player.” But his family pressured him to finish his legal education, and follow his brothers to the bar, practicing law in Ontario from 1928 until 1932.

Plaxton returned to playing Hockey for the 1932-33 season, playing for the Montreal Maroons of the NHL. He played just 17 games for the Maroons, with his 1st NHL game on November 10, 1932 vs the New York Rangers at the Montreal Forum. Plaxton scored his 1st and only NHL goal on November 24th vs Alex Connell of the Ottawa Senators, and played his final NHL game on December 27.

Plaxton retired from Hockey and returned to his law practice, but his interests soon turned to politics and he successfully ran for MP of the Toronto riding of Trinity as a liberal in 1935, defeating former Toronto mayor George Geary. His platform included promises on health insurance, minimum wage increases and youth improvement. During his time in Parliament, he introduced a resolution that would call for the creation of a Ministry of Sports, but was eventually forced to withdraw it for political reasons.

The Plaxton brothers are in both the University of Toronto (2001) and Barrie Sports Halls of Fame (2002).