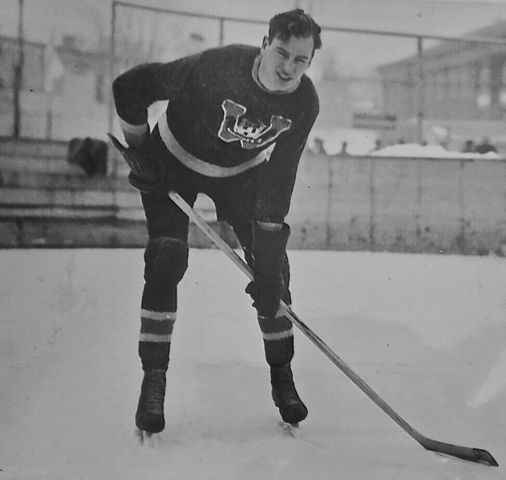 Simpson learned to play Hockey on his local ponds in the winter, later playing and practicing at the Winnipeg Auditorium and Shea's Amphitheatre.

While playing juvenile Hockey at the Olympic Rink in Winnipeg, he was noticed by the Winnipeg Pilgrims of the city's Junior Hockey League (Winnipeg and District League), and started to play with them in 1927, playing with them for two seasons.

Simpson then played for the University of Manitoba's junior team for 1929-1930 season.

He then joined the Winnipeg Hockey Club (Winnipeg Winnipegs) and, in 1931 the won the Keane Memorial Cup as Winnipeg Champions, Scotland Woolen Mills Trophy, the Pattinson Trophy (Pattinson Cup) as Manitoba Champions and then captured the 1931 Allan Cup championship as amateur champions of Canada.

The Winnipeg Hockey Club (Winnipegs), then represented Canada at the 1932 Winter Olympics in Lake Placid, New York. Simpson played in five games and scored six goals in the position of forward, a change decided by coach Jack Hughes to capitalize on Simpson's size and scoring ability. Simpson scored in the final game vs the USA team, which helped the Winnipegs to a 2-2 tie game and the Olympic Gold Medal championship for Canada.

After the 1932 Winter Olympics, there are references to Harold "Hack" Simpson signing/playing with the NHL Montreal Maroons, the IHL Windsor Bulldogs and QSHL Montreal Royals, but no actual records exist of him playing for any of these teams.

Hack Simpson was inducted into the Manitoba Sports Hall of Fame in 2004 as a member of the 1931 Winnipegs.