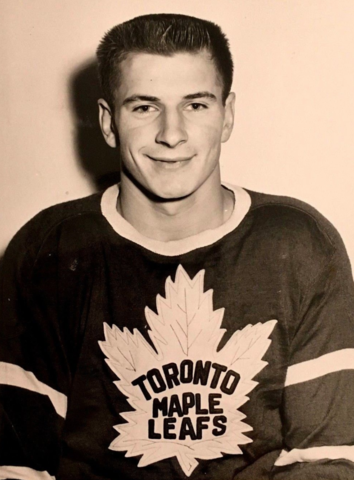 Cahan played his junior Hockey with the Fort William Hurricanes from 1950 to 1953, helping the Hurricanes win the 1952 Thunder Bay Junior Hockey League championship. Cahan and the Hurricanes also reached the Memorial Cup Semi-finals in both 1950 & 1952. While playing with the Hurricanes, Cahan was spotted by the Toronto Maple Leafs scout Squib Walker.

Cahan turned pro for the start of the 1953-54 season, playing with the AHL Pittsburgh Hornets, the Toronto Maple Leafs farm team, and led the league in penalties with 179 PIM. The next season, Cahan had his NHL debut with the Maple Leafs, and would play for the Maple Leafs for a year plus before he was sent back to the Hornets to finish the 1955-56 season.

Cahan was claimed by the New York Rangers from Toronto in Intra-League Draft, September, 1956, as the Rangers were looking for a tough blueliner and Cahan fit the bill perfectly. Cahan played with the Rangers until 1959, when they loaned him to the AHL Springfield Indians / WHL Vancouver Canucks for the loan of Milan Marcetta, January 10, 1959. Cahan finished the season with the AHL Buffalo Bisons in the playoffs (3 games).

Cahan played the next 2 seasons with the WHL Canucks, helping the Canucks to the WHL regular season title in 1959-60, and the playoff championship, winning the 1960 Lester Patrick Cup (President's Cup).

Cahan was back with the NHL Rangers the next season, and would play with the Rangers until 1964, while also playing a couple of stints with the AHL Baltimore Clippers in 1963-64 & 1964-65.

Cahan was back playing with the WHL Canucks to start the 1965-66 season, and would play in Vancouver until 1967, having a career best as a pro during the 1966-67 season with the Canucks, scoring 18 goals, 36 assists, winning the Hal Laycoe Cup (WHL's top defenseman) and was a 1st team All-Star. Cahan also set a new WHL record for defensemen in the playoffs with 16 points in 7 games during the 1966 playoffs.

Cahan was claimed by the NHL Oakland Seals from the Rangers in the NHL Expansion Draft, June 6, 1967, and only stayed there for the club's initial season. Cahan was involved in the bodycheck on Minnesota North Stars Bill Masterton on January 13, 1968, who fell backwards and cracked his head on the ice, and at the time was believed to have claimed Masterton's life, when he died 2 days later. Masterton was already suffering from a previous concussion before being bodychecked by Cahan and Ron Harris on that fateful night. Masterton is the only player to die as the result of on-ice injury.

Cahan was claimed by the Montreal Canadiens from Oakland in Intra-League Draft, June 12, 1968, and then traded to the Los Angeles Kings by Montreal for Brian D. Smith and Yves Locas, July 1, 1968, playing with the Kings for 2 seasons, and was the Kings captain between January and April 1970, where he finished his NHL career.

"I used to be mean when I was young," Larry once said late in his career. "I used to fight at the drop of a hat. But you play about 10 years and I guess you mellow a bit. Besides, I don't think that I have to prove myself. I've fought the biggest and the best guys around in three leagues."

Cahan joined the WHL Seattle Totems for the 1971-72 season, and was named team captain. Cahan was then selected by the Los Angeles Sharks in the 1972 World Hockey Association/ WHA General Player Draft, February 12, 1972. His WHA rights were traded to the Chicago Cougars by the Sharks with Bob Liddington and Bob Whitlock for Bill Young and future considerations, July, 1972. Cahan was the Chicago Cougars first team captain, and played with the Cougars for just over 1 season before retiring from Hockey as a player on October 23, 1973.

Cahan returned to Vancouver but remained active in Hockey as a player and coach for the Vancouver Canuck Oldtimers.