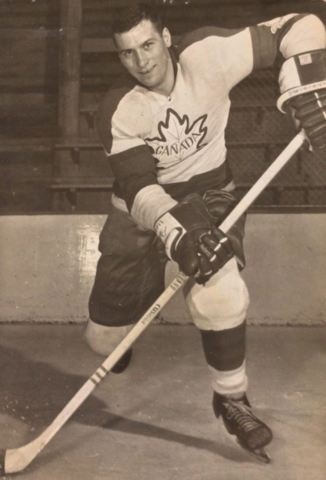 Swarbrick then represented Canada at the 1964 Innsbruck Winter Olympics.

Swarbrick turned pro with the Western Hockey League WHL's San Francisco Seals in 1964-65, and was named the WHL's top rookie after scoring 22 goals.

The Seals (Oakland Seals) joined the 1967 NHL expansion and Swarbrick scored 13 goals as an NHL rookie in 1967-68. Swarbrick was traded to the Pittsburgh Penguins in January, 1969, and would play sparingly with the Penguins, playing mostly with their farm team, the Baltimore Clippers.

Swarbrick was traded to the Philadelphia Flyers by Pittsburgh for Terry Ball, June 11, 1970, where he played only 2 games, finishing his NHL career there.

Swarbrick played 2 seasons in the American Hockey League / AHL with the Baltimore Clippers and Hershey Bears.

Swarbrick then played in the WHL (San Diego Gulls), CHL (Omaha Knights), and the North American League before retiring in 1977. During this period he topped the 20-goal mark four times and went out on a high note with a career best 32 goals with the Philadelphia Firebirds of the MAHL in 1976-77.