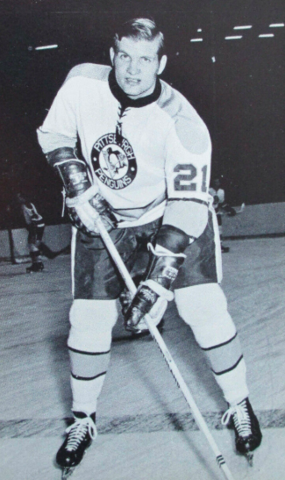 Harris played his first junior Hockey with the Weston Dukes of the Ontario Jr. B league, then joined the Toronto Marlboros full time in the 1952-53 season, helping them win the 1955 J. Ross Robertson Cup as Ontario Hockey Association / OHA champions and the 1955 Memorial Cup championship.

Harris then signed with the NHL Toronto Maple Leafs to start the 1955-56 season, playing his 1st NHL game on opening night in the National Hockey League, October 6, 1955, and scored his 1st NHL goal on October 8, 1955 vs the Detroit Red Wings. Harris played the the full season in Toronto, and then started the 1956-57 season with the Maple Leafs, but after scoring just 4 goals, 6 assists in 23 games, was sent to the Rochester Americans of the American Hockey League / AHL to finish the season.

Harris was back in Toronto to start the 1957-58 season, and would play for the Maple Leafs until 1965, helping them win Stanley Cup championships in 1962, 1963 and 1964. He had a crooked nose from Hockey and a cockeyed smile, and he quarreled with coach Punch Imlach over playing time, and many considered him Punch's whipping boy in the 1960s.

The Maple Leafs sent Harris back to the Rochester Americans in the spring of 1965, where Harris played the final 11 regular season games, and then in the playoffs, helped Rochester win the 1965 Calder Cup Championship, scoring 5 goals, 12 assists in 10 playoff games.

Harris was traded to the Detroit Red Wings along with Andy Bathgate and Gary Jarrett for Larry Jeffrey, Eddie Joyal, Lowell MacDonald, Marcel Pronovost, and Autry Erickson on May 20, 1965. After playing 24 games for Detroit in 1965–66 he was sent down to the Red Wings AHL affiliate Pittsburgh Hornets. He spent the entire 1966–67 season in the AHL with Pittsburgh leading the team with 34 goals and helping them win the 1967 Calder Cup Championship.

The following year the National Hockey League expanded from six teams to twelve and on June 6, 1967 Harris was selected by the Oakland Seals in the expansion draft. During his second season with Oakland he was traded to the Pittsburgh Penguins for Bob Dillabough. Harris would retire from professional Hockey at the conclusion of the 1968–69 NHL season.

After finishing his playing career in 1970 with the Canadian National Ice Hockey Team, Harris became head coach of the Swedish national ice Hockey team in 1971–72.

He then became the first head coach of the Ottawa Nationals in the WHA's inaugural 1972–73 season, the Toronto Toros from 1973 to 1975 and coached Team Canada in the 1974 Summit Series against the Soviet Union. He was an assistant coach of Sweden's team in the 1976 Canada Cup tournament.

Harris went on to become an assistant coach with the Edmonton Oilers under Glen Sather for two seasons beginning in 1981–82.

Harris and Dave Keon at one time operated one of Canada's biggest Hockey schools.