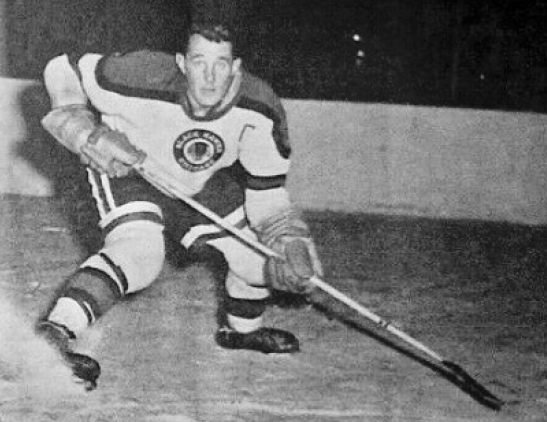 Gadsby signed as a Free Agent with the Chicago Black Hawks on July 14, 1946 and played his 1st NHL game on November 20, 1946 vs Detroit Red Wings at Chicago Stadium.

Gadsby scored his 1st NHL goal vs Bill Durnan of the Montreal Canadiens on January 1, 1947 at 17:20 of the 2nd at Chicago Stadium.

On November 23, 1954 Gadsby was traded by the Black Hawks with Pete Conacher to the New York Rangers for Rich Lamoureux, Nick Mickoski and Allan Stanley.

On March 12, 1955 Gadsby lined up a rushing Maple Leafs Tim Horton and hit him with a solid clean check that broke Horton's jaw and right leg, knocking him unconscious and ultimately setting his career back two seasons. "Thank God it wasn't a dirty check," Gadsby recalled, NHL senior referee Bill Chadwick having told him amid the chaos it was the hardest hit he'd ever witnessed.

On June 12, 1961 Gadsby was traded by the Rangers to the Detroit Red Wings for Les Hunt.

Despite a long 21 year NHL Hockey career, Gadsby never won the Stanley Cup. He came closest to winning the Cup in 1964, when the Detroit Red Wings lost a 7-game final series to the Toronto Maple Leafs.

Bill Gadsby was inducted into the Hockey Hall of Fame in 1970.