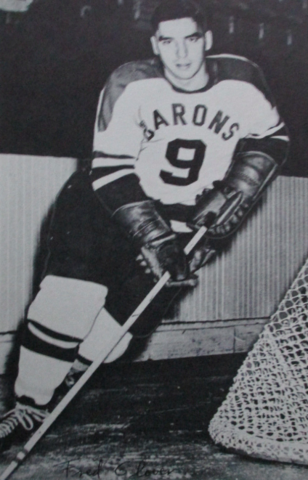 Glover played his early organized Hockey with his hometown Toronto Young Leafs, and then joined the Galt Red Wings for 2 seasons of junior Hockey from 1945 to 1947. In the 1946-47 season, Glover led Galt in scoring with 34 goals, and 60 points. His 34 goals placed him second in the league, just behind Fleming Mackell. Fred’s assist total tied him for ninth and he placed fourth in the OHA for points.

The Galt Red Wings were a feeder team controlled by the NHL Detroit Red Wings, and since Glover had signed to play in Galt, Detroit owned his NHL rights.

Glover turned pro with the Omaha Knights of the United States Hockey League / USHL for the 1947-48 season, and had a decent year, scoring 16 goals, 39 assists during the season.

Glover then switched pro teams, and leagues for the 1948-49 season, joining the Indianapolis Capitols of the American Hockey League / AHL, and led the Capitols in scoring with 35 goals and 83 points during the season. He also made his NHL debut on April 8, 1949 for the Red Wings, playing in 2 playoff games.

Glover played seven games in Detroit the next season, but played most of the season back in Indianapolis, scoring 22 goals, 29 assists during the regular season. In the 1950 AHL playoffs, the Capitols went in on a roll, plus they had a young Terry Sawchuk in net. Glover also had a strong playoff performance, scoring 5 goals, 4 assists in 8 games. His last goal would be the 1950 Calder Cup championship winning goal on April 13, and the Indianapolis Capitols would become the 1st team in AHL history to go undefeated in the playoffs. Indianapolis Star reporter Bob Stranahan said: "No single (skater) was more responsible for the victory," Stranahan said of Glover.

Glover played for the Capitols for the whole season in 1950-51, and had a league best 48 assists (35 goals) and was named to the 1951 AHL First All-Star Team. Fred also played 6 games for the Red Wings in the 1951 NHL playoffs, as Detroit fell to the Montreal Canadiens in the opening round, 4-2.

Glover would play most of the 1951-52 season with the Red Wings, scoring his 1st NHL goal on October 14, 1951 vs Al Rollins of the Toronto Maple Leafs. He had 9 goals, 9 assists in 54 games. Unfortunately, before he could play in the Stanley Cup playoffs, Glover was sent back to Indianapolis. As luck would have it, Detroit swept their way to the Stanley Cup championship that year. Glover still got his name on the Stanley Cup for the 1952 Detroit victory, even though he never played during the 1952 NHL playoffs.

Glover was then traded to the Chicago Black Hawks by Detroit with Enio Sclisizzi for cash, August 14, 1952. Glover played 31 games for the Black Hawks and 7 games for their farm team, the AHL St. Louis Flyers before he was traded to the AHL Cleveland Barons on January 16, 1953 by Chicago to complete a transaction that sent Vic Lynn to Chicago (January 4, 1953).

It was in Cleveland that Glover forged his place in AHL history as one of its greatest players ever.

In his first year and a half with the Barons, Glover totaled 90 points (32 goals) in 84 games and helped Cleveland win the 1953 and 1954 Calder Cup championship, and he quickly became one of the AHL’s marquee stars.

Glover had a chance to return to the NHL in 1954 with the Rangers. The scout who had known Glover in the Detroit organization had started working for the Rangers and through his recommendation they invited him to training camp. Glover didn't want to go, but he agreed after being badgered about that decision. "What a screwy camp that was," he said. "It was like a club, if you were in, you were okay. If not, you were considered an outsider. I went there wearing a knee brace because if I wore it I wouldn't have any problems with my knee, and I didn't. I told the trainer that, but right away, they thought I had a bum knee. So, by mutual agreement I went back to Cleveland. Hell, I didn't want to go there anyway. It was all the usual NHL garbage anyway."

Glover then had another couple of strong seasons for the Barons, being named to the 1955 AHL First All Star Team, and also helping them reach the 1956 Calder Cup finals, and after team captain Jackie Gordon became player-coach of the team for the 1956-57 season, Glover was named captain to take his place.

Now as the Barons captain, Glover would have a outstanding year, winning the 1957 John B. Sollenberger Trophy, as leading scorer in the AHL with 42 goals (57 assists), and then in the playoffs, Glover scored another 6 goals, 8 assists, as Cleveland won the 1957 Calder Cup championship. Glover was also named to the 1957 AHL First All Star Team.

Glover was named to the 1958 AHL Second All Star Team.

The heart, soul and captain of the Barons had his most memorable season in 1959-60, when in a five-week span he surpassed the AHL’s career records for goals, assists and points. Glover finished that campaign with a franchise-record 107 points, winning the 1960 John B. Sollenberger Trophy (38 goals) and the 1960 Les Cunningham Award as MVP of the AHL. Glover would also be named to the 1960 AHL First All Star Team.

Glover would be named to the 1962 AHL First All Star Team, and win the 1962 Les Cunningham Award as MVP of the AHL

Glover was then named playing coach of the Barons to replace Gordon for the 1962-63 season, and then won the 1964 Les Cunningham Award as MVP of the AHL, while also helping the Barons win the 1964 Calder Cup championship. Glover was named to the 1964 AHL Second All-Star Team.

Glover then took on the duties of assistant general manager in 1965, and continued to lead on the ice as well, helping the Barons reach the 1966 Calder Cup finals.

Glover finally retired as a player after the 1967-68 season, in which he played 992 regular-season games in a Cleveland Barons uniform, the most ever by one player for one AHL team, and he had amassed more goals in professional Hockey history than anyone except Gordie Howe and Maurice Richard.

Glover currently sits in second place on the AHL’s all-time lists for goals, assists, points and games, and third in penalty minutes. He is also third in points (104), tied for second in goals (48), fifth in assists (56) and second in games played (120) in Calder Cup Playoff action. His 17 Calder Cup postseason appearances are a league record, and his seven postseason All-Star Team berths and five First Team selections are both more than any other forward in AHL history.

Glover took a job as an NHL coach in 1968 as he joined the Oakland Seals. As a rookie coach, he was honored by The Sporting News as coach of the year, as he led his second year expansion franchise to a 22-point improvement over their initial season. However the team's performance diminished in each of the next two seasons, and he was fired just three games into the 1971–72 season. Just weeks later, he became the first coach to manage two teams in one season, as he joined the Los Angeles Kings after the franchise had fired coach Larry Regan. Glover went the opposite way, leading the Kings into another last place finish. The Kings fired him at the conclusion of the regular season.

With the World Hockey Association / WHA starting up for 1972-73 season, the Cleveland Crusaders of the WHA were more than willing to link the future of their team with the city's Hockey history of the past and they hired Glover to a front office position. A position from which he resigned in a matter of two weeks. As he explained it, "I just didn't feel right stealing other team's players."

He returned to the Seals in 1972 as a mid-season replacement, coaching the team to a last place finish. The Seals were decimated by defections to the WHA, losing a total of eight regulars and they finished last again. Ironically, the Crusaders were the team that had hit the Seals the most, signing away three players off the team. The Seals owner, Charlie Finley had riled the NHL Governors with his ownership style. The NHL finally purchased the Seals in 1974. Glover resigned from the team after the sale.

Glover's number 9 jersey was retired by the Barons in 1969 and again by the Cleveland Monsters for his career with the Barons.

If there was a "Mr. Baron", it would have been Fred Glover.

Fred Glover was inducted into the American Hockey League Hall of Fame in 2006.

Fred Glover was inducted into the Greater Cleveland Sports Hall of Fame in 2008.