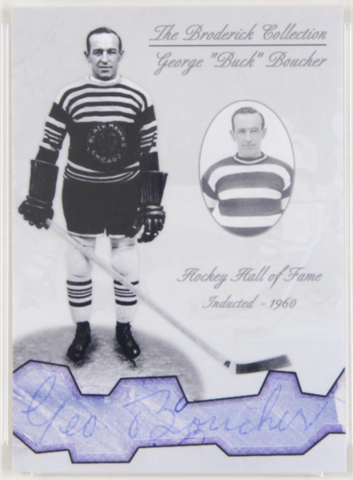 On the reverse of this card, it says;
The Broderick Collection
George "Buck" Boucher

A member of one of Hockey's best-known families, George "Buck" Boucher was a stellar defenseman during a professional career that spanned two decades. Although he wasn't blessed with lightning speed, his proficient stickhandling and competitiveness assured his status among the NHL's best.

Boucher completed his NHL career with the Chicago Black Hawks in 1931-32 after they picked him up on waivers early in the season. His total of 120 goals in 449 regular-season games was a notable achievement in this era. At his retirement in 1932 he ranked 11th among NHL career points leaders.

Boucher was inducted into the Hockey Hall of Fame in 1960, just three weeks before he died.