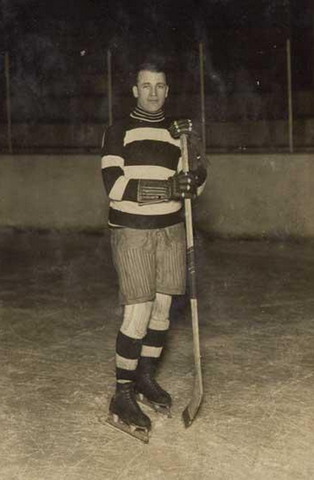 Edward George Gerard (February 22, 1890 – August 7, 1937) was a Canadian Professional Ice Hockey player and coach. Born in Ottawa, Ontario, Canada he played professionally for 10 seasons for the hometown Ottawa Senators and was member of several Stanley Cup-winning teams before retiring as a player in 1923. He continued in Hockey afterward as a coach until 1935, winning a further Stanley Cup in 1926.

He was regarded as one of the most prominent athletes in Ottawa, active in several sports and was a halfback for the Ottawa Rough Riders football club from 1909 to 1913.

In November 1913, while still an amateur player, Gerard was approached by several teams in regards to turning professional. He initially had an offer from the Montreal Canadiens of $1,000 for, but refused. Early in the month the Ottawa Senators offered him a contract of $1,500 for two seasons, which would have made him one of the highest paid players in Hockey. He also received an offer from the Sydney Hockey Club from the Maritime Hockey League promised $1,600 for the season, with an extra $1,000 to come from advertisements.

Gerard joined the professional ranks in 1913–14 with the Ottawa Senators, after playing in senior amateur play since 1907 with various Ottawa teams. He had also played rugby football, and gave that up to play with the Senators. One of the highest regarded athletes in Ottawa, he only signed with the Senators when they assured him he would be able to keep his government job. When he did sign, he was given a bonus of C$400.

He began as a forward, playing on a line with Jack Darragh and Skene Ronan, and didn't switch to defense for another three years. Following this positional shift, Gerard established himself as a tower of strength on his squad's defense while serving as the team's inspirational heart.

The 1922-23 season found Gerard on his fourth straight Stanley Cup-winning side. The Ottawa club defeated Vancouver three games to one, then vanquished Edmonton in two straight matches to claim hockey's ultimate prize. The final match against Edmonton on March 31, 1923, proved to be Gerard's swan song in pro Hockey.
He retired after the 1922–23 season.

After retiring as a player he was the Manager-Coach of the Montreal Maroons from 1924–25 season to 1928–29 season, winning his fifth Stanley Cup in 1925–26. He resigned from the Maroons, where he never had a formal contract, on July 8, 1929. Though he never stated why he left the team there were rumours that he was to join the Senators, whose former owner and manager, Tommy Gorman, resigned on the same day from the New York Americans. Offered the chance to replace Gorman as coach of the Americans, Gerard turned it down and spent the year away from Hockey.

The Americans finished last in the Canadian Division in 1929–30, so they decided to replace player-coach Lionel Conacher. This time Gerard accepted the job. One of Gerard's first acts as the new manager of the Americans was to trade away Conacher, as he didn't want the man he replaced overlooking him.

He would coach the New York Americans for two seasons in 1930–31 and 1931–32. In the fall of 1932 he returned as Manager-Coach of the Maroons. In the three years that Gerard had been away from the Maroons newspapers kept publishing rumours that he would return to the team. But it was not until the Maroons lost in the 1932 playoffs that Sprague Cleghorn was let go as coach and Gerard was hired away from New York, finally confirming the rumours.
He coached the team for two more seasons, 1932–33 and 1933–34, before being let go and replaced by Gorman.

Prior to the start of the 1934–35 season, the Senators moved from Ottawa to St. Louis, Missouri and changed their name to the St. Louis Eagles. Gerard was hired as the first coach of the Eagles and replaced his former teammate on the Senators, Georges Boucher. The team lost eleven of their first thirteen games to start the season and as a result Gerard resigned as coach of the team on December 11, 1934, with Boucher named his replacement.

When the Hockey Hall of Fame was founded in 1945, Gerard was one of the original twelve inductees.

Gerard is also a member of Canada's Sports Hall of Fame