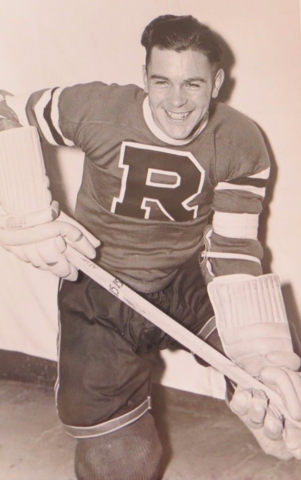 Allen began his career playing in various locations in the east - Kerrobert Tigers and North Battleford UCT, until he joined the North Battleford Beavers of the Northern Saskatchewan Senior Hockey League, with whom he went to the Allan Cup final in 1937, where they lost to the Sudbury Tigers. After playing four games with the Tigers himself the following year, Allen was then signed by the New York Rangers, and assigned to their New Haven Eagles farm team.

In 1938-39 he again played in the minors, with the Philadelphia Ramblers, but injuries to the Rangers forced them to call up Allen during the 1938–39 NHL season, taking Lynn Patrick's place in the lineup, and he earned 12 points in 19 games. In his debut with the Rangers, he scored 3 points (two goals and an assist), setting a Rangers' mark for most points in his first game (later matched by Dominic Moore in 2003). After the season, his rights were then sold to the Chicago Black Hawks, on May 17, 1939.

With the Black Hawks Allen became a regular everyday player, and was fifth in team scoring in his first season. His best season ranking-wise with Chicago was 1940-41, when he ranked second, and third in the playoffs. Allen's best season production-wise was 1943-44, when he scored 41 points, good for fifth on the team, and was third in playoff scoring, as Montreal swept Chicago in the Stanley Cup final. Allen missed the 1944–45 NHL season due to the National War Labour Board restrictions on crossing the Canada–US border. He played one more year in Chicago, and ahead of the 1946-47 NHL season Allen was traded to the Montreal Canadiens, for Paul Bibeault, with both teams holding "right of recall". After the season, the players were returned to their original teams, but after a couple of seasons in the minors playing with the Buffalo Bisons, Cleveland Barons and the Minneapolis Millers.

Allen never played in the NHL again, and went on to spend one final season as a playing-coach during the 1950–51 season with the Regina Capitals.