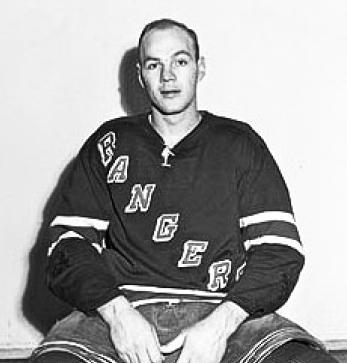 An aggressive defenceman known as "Ivan The Terrible," Irwin played 155 games with the Montreal Canadiens and New York Rangers in the 1950s. He was best known as a regular enforcer for two seasons on Broadway in 1953-54 and 1954-55. Apart from his NHL tenure he was rugged player and crowd favourite in the minors and the Quebec Senior League. Lacking speed and a good shot, Irwin made himself useful by playing his position well. His nickname originated from his poor offensive skills as much as his rugged approach to defence.
Born in Chicago, Irwin debuted with the Boston Olympics in 1947-48 when they played in the Quebec Senior and Eastern Leagues. It was with the QSHL's Sherbrooke Saints that Irwin first began to assert himself against opposing forwards and gain a local following.

After three years with the Cincinnati Mohawks of the AHL, he was sold to the Montreal Canadiens and played his first four NHL games in 1952-53. Irwin kept waiting for his chance to replace Butch Bouchard on the blueline, but the wily veteran kept improving with age. In the off-season, Montreal shipped Irwin to the Rangers for Pete Babando and Eddie Slowinski.

New York Ranger press agent Herb Goren dubbed Ivan Irwin as Ivan the Terrible. However it was never quite determined whether Goren was referring to his short temper and rugged style of play, or his lack of talent!

Irwin spent two years as a regular for the Rangers, then spent the majority of his time in the AHL. He enjoyed four good seasons with the Providence Reds and Buffalo Bisons where he was an AHL second team all-star (1957) and first team selection (1958, 1959) before retiring in 1960.