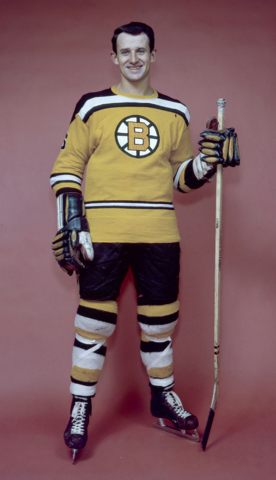 In the spring of 1950, Horvath turned pro with the Grand Rapids Rockets of the EAHL, playing in 5 games, and 6 playoff games.

Horvath toiled in the minors for several years with the Springfield Indians, Syracuse Warriors and Edmonton Flyers, Detroit's WHL farm team, wondering if he was ever going to get the chance at cracking the NHL.

It was thanks to a strong season in 1954-55 with the Edmonton Flyers of the WHL that his opportunity came about. In 67 games, Horvath potted 50 goals and 110 points. In the summer of 1955, Horvath and Dave Creighton were sent to the New York Rangers by the Detroit Red Wings in exchange for Billy Dea, Aggie Kukulowicz and cash. Horvath suited up for 66 games with the Rangers in 1955-56, scoring 12 goals and 29 points.

Horvath was then shipped to Montreal in 1957, but he would appear in just one game in a Montreal uniform before finishing the season in the minor leagues with the Rochester Americans.

Horvath was then traded to the Boston Bruins, where he blossomed as a NHLer, and produced his best offensive numbers. Joseph "Bronco" Horvath centred Johnny Bucyk and Vic Stasiuk on the Boston Bruins' famed Uke line, so named for its players' Ukrainian heritage. The Uke Line combined for 174 points in 1957-58, as Horvath lead the Bruins with 30 goals and 66 points. He added five more goals in 12 playoff games as Boston advanced to the Stanley Cup finals before losing to Montreal.

In 1959-60, Horvath battled Bobby Hull all season long for the NHL lead in goals and points. They tied at 39 goals, but Horvath lost the Art Ross Trophy by a single point, collecting 41 assists to Hull's 42. Horvath was named to the NHL Second All-Star team behind Jean Beliveau at centre that year.

The "Ukes" were broken up the following year, due mostly to injuries. Horvath himself spent another injury plagued season in Boston, playing in just 47 games. before being claimed in the Intra-League draft by Chicago. But never quite found his niche in the Windy City. The following season he split the New York Rangers and Toronto Maple Leafs. He would finish the season with the Leaf's AHL affiliate in Rochester.

Horvath played most of the next six seasons with the Rochester Americans of the American Hockey League. He was on three A.H.L. Calder Cup championships for Rochester in 1964–65, 1965–66 and 1967–68. and was among The League's Scoring Leaders for several seasons.

With the increased demand for players with the NHL expansion in 1967, Horvath found himself back in the league with the Minnesota North Stars. At mid-season of that year he returned to the Rochester Americans and helped lead them to the championship. He would finish his career with Rochester and ultimately retired from playing in 1970. Horvath is a charter member of the Rochester Americans Hall of Fame.

Horvath also had the distinction of being the property of each of the Original Six NHL clubs at one time or another.

The following year he became coach of the London Knights of the OHL, from 1971–72. He moved to South Yarmouth, Mass., when he was named coach of the Cape Cod Cubs, an expansion team in the Eastern Hockey League, in 1972. He coached the Cubs to a regular-season divisional championship and a sweep of their first-round playoff series with the Long Island Ducks before a powerful Syracuse Blazers team ended Cape Cod's league championship hopes. Horvath returned as coach for the 1973–74 season with the Cubs, who were charter members of the new North American Hockey League, but was fired after the team got off to a slow start. His last coaching job was a brief stint at Dennis-Yarmouth (Mass.) Regional High School. He still resides on Cape Cod.

Bronco Horvath has been named as a 2015 inductee to the American Hockey League (AHL) Hall of Fame.