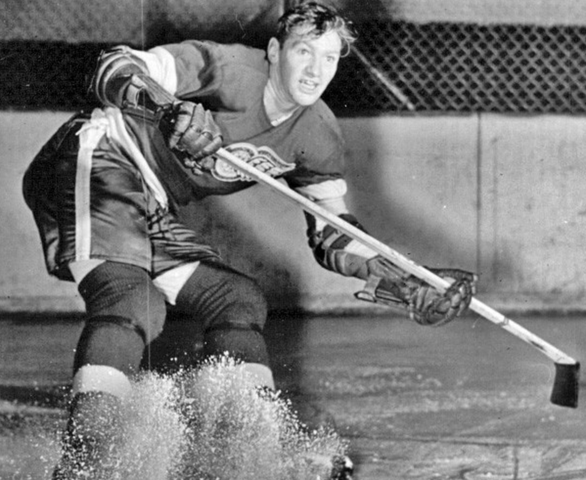 Ken Kilrea spent parts of five seasons with the Detroit Red Wings during his 14 year professional Hockey career.
Kilrea began his playing days with a year at the University of Ottawa and two seasons in the Michigan-Ontario Hockey League before signing a free agent deal with the Red Wings in March of 1938.

Because he signed so late in the 1937-38 season he was limited to just one game with Detroit that year, but he did suit up for three playoff games with them and scored a goal and an assist. The following year the left-winger played a career-high 40 games and scored 10 goals and eight assists. Again that spring he was a contributor in the playoffs with a goal and an assist in five post-season games. After playing just 36 games with the Red Wings over the next two years without much personal success, with the exception of a Calder Cup Championship in Indianapolis in 1942 that he shared with his brother, Hec, Kilrea spent the 1942-43 season playing Senior Hockey back in Ottawa, where he was born.

With his NHL career behind him Kilrea spent the next seven years playing minor pro and Senior Hockey in eight different cities before retiring in 1951.

Though he was no longer involved in the game, the Kilrea name continued in Hockey circles. Not only did two of Ken's brothers play in the NHL, but the family named continued the next generation with Brian Kilrea who had a brief NHL career before becoming the most successful coach in the history of the Ontario Hockey League with the Ottawa 67's.