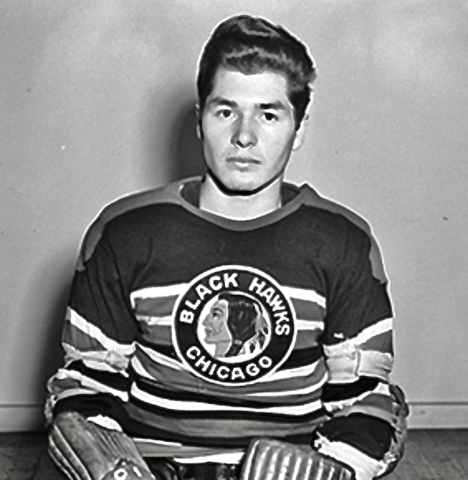 Harms then joined the Saskatoon Jr. Quakers, helping them reach the the finals of the 1943 Abbott Cup, losing to the Winnipeg Rangers (3-1 in games) who would also win the Memorial Cup that year.

Harms would sign with and be the property of the Chicago Black Hawks, who would send him to their farm team, the Hershey Bears.

- 1st Regular season NHL game on March 14, 1944 vs the Boston Bruins at Boston Garden where the Bruins defeated the Black Hawks 6-4.

- 1st Regular season NHL goal vs Frank McCool of the Toronto Maple Leafs on October 29, 1944 at Chicago Stadium. Harms opened the scoring at 5:15 of the 1st, but the Maple Leafs spanked the Black Hawks 11-5 final.

Harms had actually scored 3 NHL goals before his 1st Regular season goal as mentioned above. Harms had been playing for the Hershey Bears during the 1943-44 season, having a solid season with 10 goals (21 assists) in 52 games and being called up by the Black Hawks for 1 game late in the season. Harms then had 2 goals (1 assist) for Hershey during a tough 7 game Calder Cup semi-final vs Cleveland Barons who won the series.

Chicago then called Harms up for the 1944 Stanley Cup finals vs the Montreal Canadiens and the 18 year old kid did well, becoming the 1st NHL player to score in 3 straight Stanley Cup final games before he ever scored a regular season NHL goal. (Frederick Gaudreau of the Nashville Predators equaled this feat during the 2017 Stanley Cup finals).

Harms went scoreless in the first game at the Forum in Montreal, then in game two at Chicago Stadium, Rocket Richard had the Canadiens up 3-0, when late in the 3rd, Harms scored (19:59) to break up Bill Durnan's shutout....3-1 finish.

Game three, Harms scored early in the 3rd to put Chicago up 2-1, but just 91 seconds later Montreal scored 2 quicks goals in less then a minute to win the game 3-2.

Game four, back at the Montreal Forum, Harms scored 7:30 into the 2nd, with Chicago scoring 2 more to take a 4-1 lead into the 3rd. It was all Montreal in the 3rd with Rocket getting 2, one of which tied the game late in the 3rd, and then Toe Blake winning it in overtime as The Canadiens were 1944 Stanley Cup champions. Harms also got his 1st NHL penalty in game four....a minor, early in the 3rd.

Harms would then join the Kansas City Pla-Mors who were joining the United States Hockey League for the 1945-46 season. Harms had a great first season for the Pla-Mors, scoring 26 goals (25 assists) in 45 games, then helped Kansas City win the 1946 USHL championship, scoring 2 goals (2 assists) in 12 playoff games.

Harms played 60 games for the Pla-Mors the next season, scoring 21 goals (35 assists) and then turned his play up for the Playoffs, with 3 goals and 9 assists, helping the Pla-Mors win back to back USHL championships in 1947.

Harms had 5 solid seasons in Kansas City, becoming a fan favourite with his hard hitting and goal scoring ways. He like to frequent the penalty box, close to his fans.

In the summer of 1950, Harms went back to his home province of Saskatchewan, and played the start of the 1950-51 season with the Regina Capitals, but was persuaded to head to the Kootenay Mountains, playing for the Nelson Maple Leafs. After 2 seasons in Nelson, Harms had found the Okanagan Valley, signing with the Vernon Canadians, where he would finish his career.

The Vernon Canadians were a very good senior Hockey team, known as "The Blues" and Harms fit right in, playing from 1952 to 1961, eventually becoming their team captain.

Vernon had 2 really solid years of top notch Hockey. Check this out for 1956, that's a lot of championships. They did the same thing in 1959, but lost in the Allan Cup final.