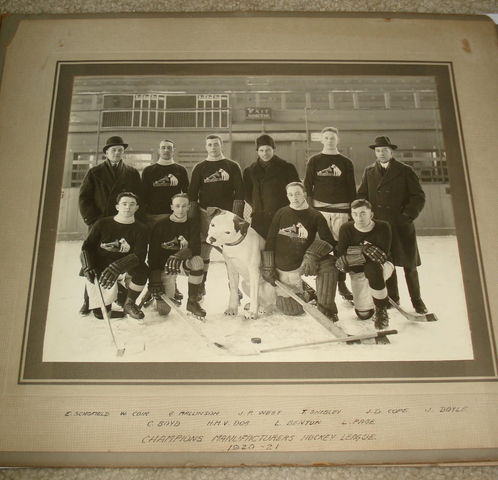 The team name Nipper HMV comes from the dog logo, and the dogs name, with HMV standing for His Masters Voice.

The Nipper name also has a great story:
Sometime during the 1890s, English artist Francis Barraud painted a picture of his brother's dog, Nipper, a Fox Terrier inquisitively listening to a phonograph. Barraud hoped to sell the painting to a phonograph company, but could not find an interested buyer. After receiving a suggestion to change the trumpet of the machine from black to brass, Barraud went to the Gramophone Company's office to borrow a machine to use as a model. In explaining his request, Barraud showed a photograph of his painting. The manager, Barry Owen, liked the painting and asked if it was for sale. When Barraud replied that it was for sale, Owen agreed to buy the painting if the phonograph could be replaced with a gramophone.

When Emile Berliner visited England in May 1900 and saw the picture, he promptly registered it as a trademark -- in the United States on May 26th and in Canada on July 16th. The Victor Talking Machine Company began to use the painting as a trademark in 1902, and the Gramophone Company in 1909.

The original painting hangs in the offices of EMI, the successor of the Gramophone Company. It is one of the most widely recognized and valuable trademarks in the world.