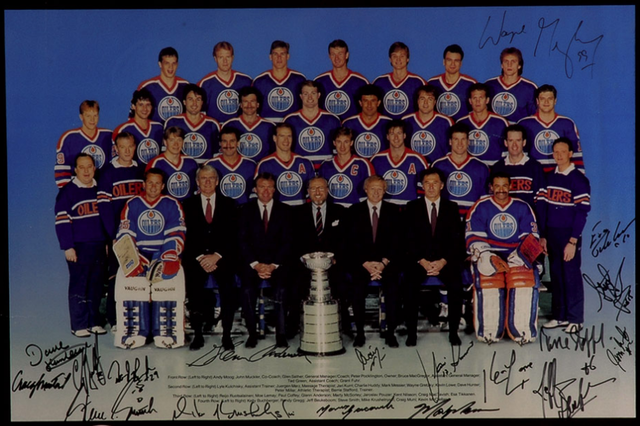 The 1987 Stanley Cup Final was played between the Edmonton Oilers and the Philadelphia Flyers. The Oilers would win the series 4–3, for their third Stanley Cup victory.

The Oilers and Flyers met in the finals for the second time in three years. This time, Edmonton was the regular season champion with 50 wins and 106 points, and Philadelphia was second with 46 wins and 100 points.
This was a re-match of the 1985 Stanley Cup Finals, where the Oilers beat the Flyers in five games. Unlike the 1985 final, this series went to seven games. Edmonton took the first two games at home, then split in Philadelphia. However, the Flyers won the next two games, one in Edmonton and one back in Philadelphia by one goal, to force a deciding seventh game. Edmonton won game seven to earn its third Stanley Cup in four seasons.
During the Stanley Cup presentation, Oilers captain Wayne Gretzky would give the Cup to Steve Smith, who one year earlier scored on his own net that led to their downfall against the Calgary Flames, their in-province rivals, in the Smythe Division Final. Ron Hextall would receive the Conn Smythe Trophy for his efforts.