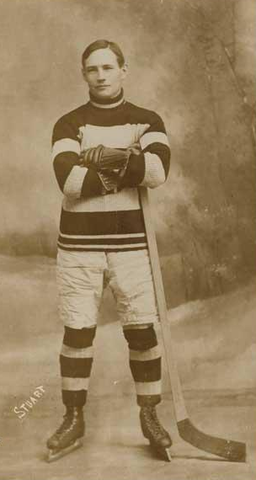 Bruce Stuart (November 30, 1881 in Ottawa, Ontario - October 28, 1961 in Ottawa, Ontario) was a Canadian Amateur and Professional Ice Hockey forward who played for the Quebec Bulldogs, Ottawa Senators, Montreal Wanderers, Portage Lakes Hockey Club and Pittsburgh Professionals from 1899 to 1911. Stuart is considered to be an early power forward, a forward who combines physical play with scoring ability.

Stuart turned professional with the Pittsburgh Victorias of the WPHL in 1902. Stuart led WPHL with 16 goals in his first pro season and was named to the First All-Star team. The Pittsburgh Victorias were one of the earliest professional ice Hockey teams. The club was based in Pittsburgh, Pennsylvania and were members of the Western Pennsylvania Hockey League, the first league to openly hire Hockey players, from 1902-1904.

He furthered his professional career in the International Professional Hockey League with Portage Lakes Hockey Club, counting 68 goals in 65 games over a span of three seasons.

In 1908, Stuart hooked up with the Montreal Wanderers and participated in the March Stanley Cup challenge series. He contributed eight goals in the three challenge games including four in one game against Winnipeg and the insurance marker in the Wanderers 6-4 victory over Toronto. He was also with the Wanderers when they defended their Cup title against the Edmonton Eskimos in December 1908.

Stuart returned home to Ottawa for the 1909 season and captained the Senators to a Stanley Cup wins in 1909 and 1911.

Stuart retired from playing after the 1910–11 season and managed a shoe store he owned in Ottawa until 1952 along with some coaching.
Despite his age, he attended his induction into the Hockey Hall of Fame in 1961. He died not long after.