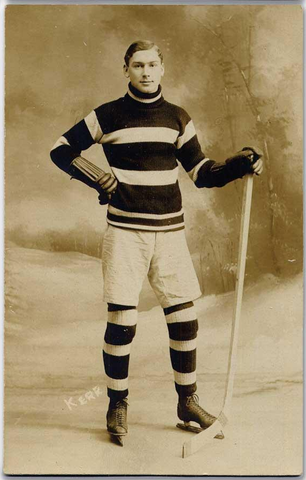 Albert Daniel "Dubbie" Kerr (June 19, 1888-September 17, 1941) was a Canadian professional hockey player. He was a member of the 1909 and 1911 Ottawa Senators Stanley Cup-winning teams. Born in Brockville, Ontario, he started out as a professional with Pittsburgh in 1907 before returning to Canada with the Toronto Pros in 1908. He played with the Senators from 1909 until 1912. In 1913, he moved out west to play in the Pacific Coast Hockey Association until 1920 for the Victoria Aristocrats.

Kerr started his career in his hometown of Brockville, Ontario, playing junior and intermediate amateur hockey for Brockville of the Ontario Hockey Association. He turned professional in Pittsburgh, Pennsylvania in 1907-08. He joined the Toronto team of the Ontario Professional Hockey League during 1908-09 but jumped to the Ottawa Senators and became a star. He played with future Hall of Famers Marty Walsh and Billy Gilmour. He also played alongside Bruce Ridpath and scored 20 goals in nine games as Ottawa won the Eastern Canada Hockey Association title and the Stanley Cup.
In 1910, Kerr suffered a serious skate cut to his right eye, at first losing his sight, necessitating an eye operation, limiting his play to five games. He would recover to play in the 1910–11 season.
During the 1910–11 season, he along with Walsh and Ridpath, scored in 12 consecutive games, including five in one game and had 33 goals in 16 games to finish behind Walsh in NHA scoring. Kerr, Ridpath and Walsh had one, two and three goals respectively in a 7–4 Stanley Cup challenge win over Galt, Ontario.
Kerr retired after the 1911–12 season but Lester Patrick lured him to Victoria, British Columbia of the Pacific Coast Hockey Association in 1913–14. He remained an effective scorer in the PCHA until 1920.