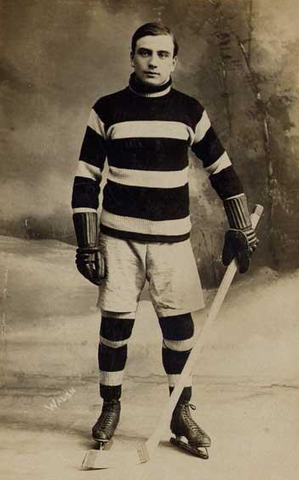 At age 17, Walsh entered Queen’s University, where he played rugby and starred for the senior Hockey team from 1902 to 1906. He helped lead his team to the intercollegiate Hockey championship in both 1904 and 1906. The Queen's University Golden Gaels challenged the Ottawa Silver Seven (Ottawa Hockey Club) for the Stanley Cup in a two game, total goals series on February 27th and 28th, 1906. Walsh scored 4 goals, 2 in each game, as Ottawa won the series 16-7 and 12-7. HHOF inductee George Richardson was his teammate from 1903 to 1906.

Walsh turned professional for the 1906–07 season with the Canadian Soo of the International Professional Hockey League / IPHL playing only 7 games due to a broken ankle, which ended his season.

Walsh had a 10 goal game in a Stanley Cup challenge match against Port Arthur on March 16, 1911 (13-4 Ottawa win), which is second only to Frank McGee's 14 goals in one game during Stanley Cup play.

Walsh was named team captain of the Ottawa Hockey Club for his final season of 1911-12.

After retirement, Walsh went to Winnipeg to start a cattle ranch with fellow teammate Dubbie Kerr. This venture never got off the ground, as Kerr was lured to the Pacific Coast Hockey Association / PCHA and Waslsh then went to Edmonton, Alberta where he worked for the Grand Trunk Railway. While in Edmonton, he coached the Edmonton Eskimos team for two seasons. He guided the Eskimos to the 1913 Inter-City Hockey League championship and an Allan Cup challenge.

In 1914, Walsh fell ill with tuberculosis. In February 1915, Walsh entered the Gravenhurst Sanitorium in Muskoka, Ontario for treatment, but when admitted, the doctors estimated he had only a short time left to live. Walsh died on March 27, 1915. His remains were transported to Kingston, Ontario for burial in St. Mary's Cemetery after a funeral at St. Mary's Cathedral

Marty Walsh was inducted into the Hockey Hall of Fame in 1962.