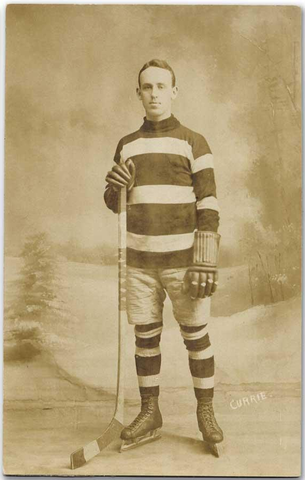 Currie graduated to senior Hockey with the Ottawa Primroses of the Ottawa City Hockey League in 1907, joining the Ottawa Emmetts in 1908.

Currie played lacrosse during the off season of Hockey with the Ottawa Capitals.

Currie turned professional with the Haileybury Comets for the inaugural season of the National Hockey Association / NHA in 1909-10, and would become the first pro player in NHA history to score 6 goals in a game, vs the Montreal Canadiens on February 26, 1910.

Currie returned to Ottawa to play for the Senators in their 1910-11 season. The Senators would win the 1911 Stanley Cup championship, but Currie was a spare and did not play in the 2 challenge matches vs Galt (March 13, 1911) and Port Arthur (March 16, 1911). He was also loaned to Quebec for one game that season.

The following season, he did not play Hockey. He returned to the NHA for the 1912-13 season with the Montreal Wanderers, and played one final season with Senators in 1914-15.

Starting in 1914, Currie became coach of various teams in the Ottawa area. He was head coach of the Ottawa Senators in the National Hockey League / NHL for the 1925-26 season.