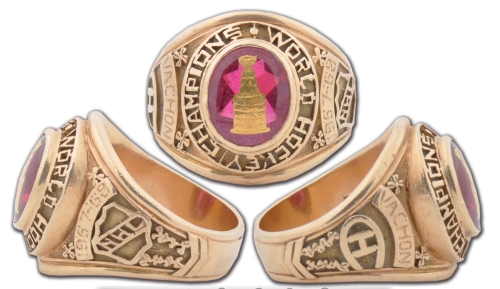 The original gold ring that was presented to Montreal Canadiens goalie Rogatien Vachon to commemorate the Habs' 1967-68 Stanley Cup championship.

A golden image of Hockey's ultimate prize appears on a red stone here, with "World Hockey Champions" encircling it. The left shank features "Vachon" engraved on a banner above a raised image of the Canadiens' famed "CH" logo. A raised gold NHL shield logo appears on the right shank, which features "1967-68" engraved on a banner above it. The size 10 1/4 ring exhibits light-to-moderate wear with "14K" stamped on the interior of the band