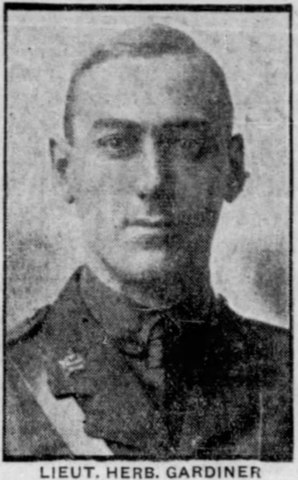 Gardiner joined the Canadian Army in 1915, signing up in Calgary, Alberta and started as a private with the 12th Battalion of the Canadian Mounted Rifles / CMR, went to England, was taken on strength with the 2nd CMR, who went unhorsed to fight in France in 1916.

Gardiner was promoted corporal that year and then lance-sergeant, and we know that he was wounded in June, probably near Hooge in the Ypres Salient in Belgium. After recovery from the wound on his face, he was promoted to company sergeant-major, then temporary lieutenant. The following year he spent a lot of time in hospitals with (as per the medical file) bronchitis, pleurisy, catarrhal jaundice, before earning a medical discharge.

Returning from the war, Gardiner resumed his surveyors job with the Canadian Pacific Railway and settled in Calgary, also resuming his Hockey career, playing with the Calgary Wanderers and then Calgary Tigers.

Sourced from The Calgary Herald, January 2, 1919. Credited to Unknown.