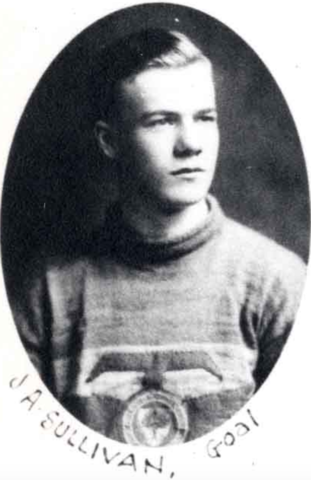 Sullivan was the 1st Goaltender to win the OHA Memorial Cup / Memorial Cup in 1919, when he backstopped the University of Toronto Schools Hockey Team in a best of 2 two, total goals championship series. Sullivan allowed 3 goals in the first game, which ended in a 14 to 3 victory over the Regina Patricians, and allowed 5 goals in the second game, in a 15 to 5 victory.

Sullivan graduated from the University of Toronto Faculty of Medicine in 1926. At the 1928 Winter Olympics in St. Moritz, he was the goaltender on the Canadian Gold medal ice Hockey team and did not allow a goal in the three-game round-robin.

In 1930, he started his medical practice, specializing in otolaryngology. During World War II, he served as a captain in the Royal Canadian Air Force and worked in otolaryngology. After the war, he became an associate professor at the University of Toronto.

One of his patients was the Prime Minister of Canada, John Diefenbaker. In 1957, he was appointed to the Senate of Canada by Diefenbaker, representing the senatorial division of North York, Ontario. A Progressive Conservative, he resigned in 1985.

In 1988, he was inducted into the University of Toronto Sports Hall of Fame.

The Senator Joseph A. Sullivan Trophy, named in his honour, is presented annually to the outstanding Hockey player in Canadian Interuniversity Sport.

A Roman Catholic, Sullivan was a Knight of the Order of the Holy Sepulchre and a Knight Commander of Order of St. Gregory the Great with distinction.