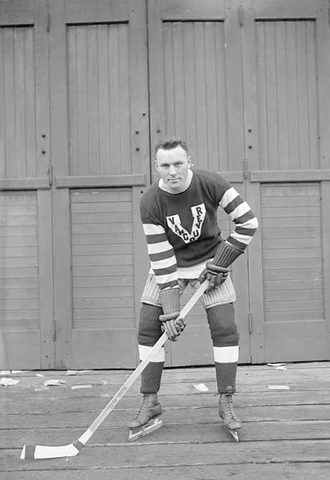 Duncan would then head to Vancouver, and debuted in professional Hockey, playing in the Pacific Coast Hockey Association for the Millionaires for the 1915-16 season.

In 1926 he served as the first team captain, playing coach, and general manager of the Detroit Cougars of the National Hockey League (NHL). In 34 games, he scored three goals and two assists. Jack Adams replaced him as coach for the following season and Duncan decided it was time to move on.

Aside from Bobby Orr, Art Duncan is credited with being the only other defenseman to ever win the scoring title in a professional Ice Hockey league in the 1923-24 season.
"BUT, Duncan played for the Vancouver Maroons of the Pacific Coast Hockey Association / PCHA, and the PCHA played an interlocking schedule with Canada's other western major league, the WCHL. In 1924, for example, Vancouver played 11 games against each of Victoria and Seattle, the other PCHA clubs, and two games against each of Calgary, Edmonton, Regina and Saskatoon of the WCHL. Although Vancouver was technically in the PCHA, they played 27% of their regular-season matches against WCHL clubs. For all intents and purposes, the PCHA and WCHL were two conferences of the same league, a league with an imbalanced schedule.