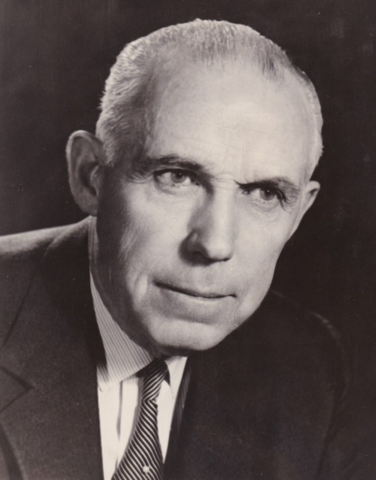 Clarence Sutherland Campbell (Order of the British Empire, Queen's Counsel) - Born July 9, 1905 in Fleming, Saskatchewan – Died June 24, 1984 in Montreal, Quebec was a amateur ice Hockey player, referee, and the third president of the National Hockey League / NHL from 1946 to 1977.

Campbell's tenure as NHL President (31 years) was longer than any executive in any other sport, and he responsible for the shape the NHL is in and the way it is being run today.

Campbell learned to play Hockey on the frozen ponds of Saskatchewan during his childhood and youth, and moved to Edmonton, Alberta to attend the first high school in Alberta - Strathcona High School / Strathcona Collegiate Institute. While in Edmonton, Campbell saw his first professional Hockey, as the Edmonton Eskimos were a very successful local team.

Campbell then earned a law and arts degree at the University of Alberta in 1924 and continued his education and passion for Hockey as a Rhodes Scholar at Oxford University, where he was a member of the Oxford University Ice Hockey Club, and was team captain in 1929 when they won the coveted Varsity Match in St. Moritz. During this period he also studied refereeing and worked several Hockey and lacrosse matches in Europe, including lacrosse matches at the 1928 Summer Olympics in Amsterdam.

When Campbell returned to Alberta, he practised law with the firm of Wood, Buchanan, McDonald, McDonald and Campbell in Edmonton, he supplemented his income by refereeing games in the local Canadian Amateur Hockey Association / CAHA. His proficiency caught the attention of the NHL, and by 1936, Clarence had been hired by NHL president Frank Calder to officiate games at the start of the 1936-37 season.

Campbell officiated several historic games, including the final game Howie Morenz ever played. That evening, January 28, 1937, the Montreal Canadiens played the Chicago Black Hawks in Montreal. In the first period, Morenz went after the puck in the Chicago end while chased by defenceman Earl Seibert. Morenz lost his balance and crashed into the boards, his left skate caught in the wooden siding. Seibert was unable to stop and landed on Morenz with his full weight and force. The impact snapped Morenz's left leg. Morenz was taken to Hôpital St-Luc, where it was found that his leg was fractured in four places. Morenz never played again and died from a coronary embolism caused by blood clots from his damaged leg on March 8, 1937.

But while Campbell was fair, he was not without his detractors. In a playoff contest between the Boston Bruins and Montreal Maroons, Boston's Dit Clapper used his stick to hit an opponent. Out of character, Campbell was so angry at Clapper's action that he used profanity on Clapper, which prompted the Bruins' defenceman to punch Campbell, knocking him to the ice surface. Campbell, aware that his profane language provoked Clapper, issued a report to NHL president Frank Calder that explained the action, and Calder issued Clapper a fine but no suspension.

In 1939, while refereeing a game involving the Toronto Maple Leafs, Red Horner was highsticked and cut. Campbell called a minor penalty. Conn Smythe, fiery Maple Leafs owner, was so incensed he demanded Campbell's removal as a referee. Smythe lobbied his colleagues and NHL President Calder to not renew Campbell's contract, and was successful in ending the referee's NHL officiating career. As a result, Clarence Campbell spent the last few months of 1939 working in the league head office with NHL president Frank Calder, and was not rehired the following season.

In all, Clarence Campbell refereed 155 regular season NHL games and another twelve in the playoffs.

When the Second World War broke out in 1939, Campbell put both his law practice and his officiating on pause in order to serve his country. He enlisted in the Canadian Army in the summer of 1940 in the Second Battalion of the Edmonton Fusiliers. He entered the army at the rank of 2nd lieutenant, not unusual for someone with a degree in law and a Rhodes Scholar, and quickly rose through the ranks. Over the next four years he trained in a range of branches of the army, serving in an infantry battalion, the artillery, the armoured corp, and in a divisional headquarters. Campbell was assigned to command the Headquarters Squadron of the 4th Canadian Armoured Division, which crossed the English Channel to Normandy in late July, 1944.

Following the armistice, Campbell joined the Canadian War Crimes Investigation Unit. There he was elevated to the acting rank of Lieutenant Colonel, and came under the command of a pre-war colleague, Colonel Bruce MacLeod. Together they successfully prosecuted infamous SS General Kurt Meyer for the murder of Canadian soldiers who had been taken prisoner in Normandy. He was later awarded the Order of the British Empire and was made King's Counsel.

On his return to North America in 1946, Campbell was appointed assistant to NHL president Red Dutton, who had taken the position on the sudden death of Frank Calder. A few months later, during the NHL's semi-annual meeting, Dutton resigned and put forward his able assistant to succeed him.

During his tenure, Campbell played a significant role in shaping the game. In 1947 the first official All-Star Game was played, and took place at Maple Leaf Gardens in Toronto on October 13, 1947 to raise money for the newly created NHL Pension Society. The NHL All-Stars defeated the Toronto Maple Leafs 4–3 and raised C$25,000 for the pension fund - Most importantly, Campbell initiated the breakthrough NHL Pension Plan with contributions from the players and the league.

He curbed gambling within the NHL, handing lifetime suspensions to Billy Taylor and Don Gallinger, former teammates with Boston, for gambling on NHL games, including their own.

Prior to the 1949-50 season, the league increased the number of games played from 60 to 70 games. To alleviate the talent challenges being experienced by Boston and Chicago, the NHL under Campbell instituted an Intra-League Draft in the early-1950's to better balance the talent league-wide. This allowed the weaker teams to access the young talent hoarded by the richer clubs, especially Toronto and Montreal.

"Campbell's law was Hockey's law. He knew the game, was well researched and his decisions were fair and just.''

White-haired and stately, Mr. Campbell was the target of assaults, thrown tomatoes and threatening telephone calls and letters after one celebrated ruling. That followed an incident on March 17, 1955 at the Montreal Forum.

With three games remaining in the N.H.L. regular season, Mr. Campbell suspended Maurice Richard, the Montreal Canadiens' star and the idol of their fans, for the remainder of the season and Stanley Cup playoffs for bludgeoning Hal Laycoe, a defenseman for the Boston Bruins, with his stick and punching Cliff Thompson, a linesman.

After rendering his decision, Mr. Campbell appeared at the next Canadiens game with his secretary, Phyllis King, who was later to become his wife. Throughout the first period he was taunted and pelted with debris by outraged Montreal fans, who saw him as a prime example of the city's English-Canadian elite oppressing the French-Canadian majority. After a tear gas bomb was released in the arena, Campbell exited the building, the game was forfeited to the Red Wings, and the Forum was evacuated. What ensued was a full-fledged riot in Montreal, which 60 people were arrested and $500,000 in damage was done. But Mr. Campbell, who had been ridiculed during his childhood as a ''little girl'' for wearing the kilts of his Scottish ancestors, stood by his decision. Without Richard, the Canadiens were eliminated from the playoffs days later.

Looking back years later, Mr. Campbell said: ''It was a regrettable incident. But for me not to have shown up at that game would have been the equivalent of abdication. The authority of the league was challenged. Discipline had to be maintained.

''It helped Richard. He had reached the stage where he wanted to challenge authority. Now, he has a better appreciation of the importance of conformity to regulations. He is not rebellious anymore.'' Controversies Abounded.

The first players' union was formed February 12, 1957 by Red Wings player Ted Lindsay who had sat on the board of the NHL's Pension Society since 1952. Lindsay and his fellow players were upset by the league's refusal to let them view the books related to the pension fund. The league claimed that it could not contribute more than it did but the players on the Pension Committee suspected otherwise. The idea quickly gained popularity and when the union's founding was announced publicly, nearly every NHL player had signed up. Led by Alan Eagleson, the National Hockey League Players' Association (NHLPA) was formed in 1967, and it quickly received acceptance from the owners, NHL president Campbell and the league.

Much later in his time as NHL president, Campbell oversaw NHL expansion, something he and the board of directors had resisted earlier. Prior to 1967-68, the league doubled in size, expanding from six to twelve teams. In 1970-71, two more teams were added. Two more teams were added for 1972-73. Another pair of teams was added for 1974-75. That meant that the NHL had tripled in size from the time Campbell first took office, increasing awareness and revenue for the National Hockey League.

Perhaps Campbell's greatest contribution to the National Hockey League was navigating the league through turbulent waters while the World Hockey Association / WHA was attempting to establish itself and provide an unwelcomed challenge to the NHL. He met the challenge of the WHA head on and refused to allow players not under contract to NHL teams to participate in the 1972 Summit Series between Canada and the USSR. The most notable exclusion under this corollary was former Chicago Black Hawks star Bobby Hull. The fledgling WHA existed for seven uncertain seasons before disbanding, with many of the teams joining the NHL.

Campbell retired from the NHL presidency in 1977, but was retained as an advisor to the league. During his 31 years running the NHL, it would be difficult to name anyone more powerful or influential in shaping the game.

The Clarence S. Campbell Bowl was donated by the NHL's clubs in recognition of the contributions and services of its namesake, the League President at the start of the Modern Era expansion. Throughout its history it has been a parallel to the Prince of Wales Trophy, using the same criteria in the opposite competitive grouping. From its inception in the 1967–68 season through to 1973–74 it was awarded to the first-place finisher in the West Division during the regular season. With NHL realignment in 1974–75, it was given to the team with the best regular-season record in the Campbell Conference (the successor to the West Division) through the 1980–81 season. Beginning with the 1981–82 season, it switched to the Campbell Conference playoff champions, and since the 1993–94 season, when the Campbell Conference became the Western Conference, has gone to the Western Conference playoff champions.

In 1974-75, the league renamed its conferences, with the Clarence Campbell Conference comprised of the Patrick and Smythe divisions, and the Prince of Wales Conference made up of the Adams and Norris divisions. The NHL changed the conference names to the Western and Eastern conferences in 1993-94

Clarence Campbell was elected to the Hockey Hall of Fame in 1966.

Clarence Campbell is a "Honoured Member" of Canada's Sports Hall of Fame - Inducted in 1975.

"Although Campbell scored no NHL goals, he did more for Hockey than any man in its history."