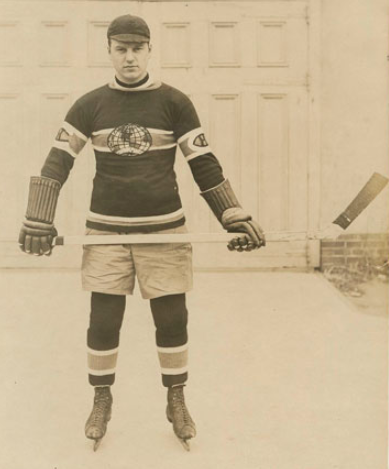 The next season, Aurèle was recruited to play for the Iroquois Falls Papermakers in the Northern Ontario Senior Hockey Association. And then, for a NOHA playoff game he was brought in as a hired gun or ringer. Before the game, Aurèle had accepted money from gamblers to help throw the championship game, and instead scored 6 goals in the Iroquois win.

He made his backdoor arena getaway, as he tells it, in full Hockey gear, minus skates, suitcase in hand, bound for a train to Saskatoon, Saskatchewan in Western Canada.

His plan was to settle in Saskatchewan and play for the Saskatoon Sheiks of the Western Canada Hockey League / WCHL for the 1921-22 season, but sometime between ending his association with New Edinburghs and heading West, Joliat had an encounter with Tommy Gorman, then GM of the Ottawa Senators.

Gorman proposed Joliat a lowball deal - a $250 contract for a season as an Ottawa Senators spare. Joliat thumbed his nose at the offer and balked. The Ottawa GM then threatened to suspend Joliat from the pro ranks.

Joliat's reply to Gorman, was a simple, "Thanks for that, Tommy. Thanks alot!" as he closed the door behind him.

Gorman, a future Canadiens GM from 1940 to 1946, had powers and connections league and nation wide, and the threat to Joliat was that he would be unable to find a league anywhere in Canada to play in. The threat proved true, and Joliat was unable to play for the Sheiks. Instead, he found work harvesting wheat.

"Why Joliat was not allowed to play in Saskatoon is unclear in the big picture, as there have been multiple stories / interview clips over the years with different stories about Gorman and the Gamblers with the Iroquois team."

On September 18, 1922, Joliat was traded to the Montreal Canadiens of the National Hockey League / NHL, along with $3,500, for fading star Newsy Lalonde going to Saskatoon.

At first, the deal of an unknown for the greatest player in the game was wildly unpopular with Canadiens fans, but the "Little Giant" proved an immediate success on the ice. Wearing his trademark peaked cap, Joliat was an instant scoring sensation, finishing among the NHL’s leaders in his rookie campaign, scoring 12 goals, 9 assists and 37 penalty minutes.

At just 5-foot-6 and tipping the scales at 136 pounds, Joliat played in an era when men took care of themselves on the ice. Bigger men intent on inflicting physical damage soon found out that that Joliat refused to back down and often felt no obligation to drop his stick, especially when settling accounts with adversaries 50 pounds heavier.

Toughness combined with speed, smarts and shiftiness were Joliat’s trademarks for the next 16 seasons. Most NHLers of the 1920s and 30s had nicknames; Joliat had two. He was known as both “The Little Giant” and “The Mighty Atom”.

Joliat was paired with Howie Morenz the following season and the two went on to form one of the most potent scoring duos of the NHL’s early years. That season (1923-24), left winger Aurèle finished third in NHL scoring with 20 points (15 goals and 5 assists). Morenz, on the right side, finished ninth with 15 points. Their centre, Billy Boucher, had 22 points, good for second in scoring. The Canadiens finished second in the four-team league.

This formidable trio led the Canadiens to victory over the Ottawa Senators in the NHL playoffs, winning the 1924 O'Brien Trophy as NHL playoffs champions, and then they played the Vancouver Maroons in the Stanley Cup semi-final, defeating then 2–0 in a best-of-three to advance to the Final. In the finals vs the Calgary Tigers, Joliat assisted on the game one winner , scored by Morenz in the 2nd period, then Joliat scored a goal in the 3rd. Joliat also scored in game two, as the Canadiens defeated the Tigers 2–0 in a best-of-three to win the 1924 Stanley Cup championship.

The trio finished third, fourth and fifth in scoring in the 1924-25 season. Joliat collected career-bests in points with 42 and goals with 30. Morenz had 39 points (27 goals) and Boucher had 30 points (18 goals) and then helped the Canadiens win the 1925 O'Brien Trophy as NHL playoff champions, but lost the Stanley Cup to the Victoria Cougars.

Joliat and Morenz Hockey skills complemented each other perfectly. "I can't say that I played with Morenz, although I tried to," the self-effacing Joliat later claimed. "Morenz was so fast that I had to scoot well ahead of him on a rush or I was always lagging behind him, trying to catch up." Nevertheless, the duo continued to tear up the NHL

In the 1927-28 season, the pair finished one and two in NHL scoring. Morenz had 51 points and Joliet 39, and helped the team win the 1928 and 1929 O'Brien Trophy as NHL Canadian Division Champions. When Morenz won the scoring NHL title for the 1927-28 season, Joliat, his line-mate had 10 game winning goals and a career high 103 penalty minutes during the season.

In the 1929-30 season, Joliat scored 19 goals, 13 assists in the regular season, and only had 1 assist in the Stanley Cup finals, but it was a important one, as they were playing the Boston Bruins, with a record of 38–5–1 which translates to an .875 winning percentage, the best in NHL history. The team did not lose two games in a row all season until they played the Canadiens in the final. Joliat assisted on the second goal in game 1, as the Canadiens won 3-0, and in game 2, the they defeated Boston 4-3 to win the 1930 Stanley Cup championship.

In the 1930-31 season, Morenz again led the league in scoring with 51 points while Aurèle finished eleventh with 35 points (13 goals). The Canadiens won the 1931 O'Brien Trophy as NHL Canadian Division Champions, and then defeated 3-2 in games, Boston in a tough playoff semi-final, with Joliat picking up 2 assists, including 1 assist in game 5.

Every year after the regular season the Professional Hockey Writers Association votes for the best performers over the season at each position. The top two players at each position are named to the First and Second All-Star Teams. The teams were first awarded at the end of the 1930-31 NHL Season with Joliat and Morenz on this team.

Aurèle continued to contribute significantly to the Canadiens. He finished tenth in NHL scoring in 1931-32, sixth in 1932-33 and eighth in 1933-34. That season, after recording his third 20-goal season, Joliat was awarded the 1934 Hart Trophy as the league's most valuable player.

Aurèle was the inspiration for Wilson MacDonald's 1935 poem "Monsieur Joliat".

Morenz was traded prior to Chicago prior to the 1934-35 season, joined the Rangers partway through the 1935-36 season and returned to the Canadiens for 1936-37. But on January 28, 1937, he suffered a career-ending broken leg in a game against the Black Hawks. He never recovered and died on March 8.

After his friend and teammate Morenz died, Joliat was never the same on ice. His passion and trademark speed were no longer evident. The record books show that he retired following the 1937-38 season, but he vehemently disagreed "Retired? Hell! The Canadiens fired me when the Montreal Maroons folded and some of their players moved over to the Canadiens!"

Aurèle Joliat's 16-season NHL career saw him score 269 goals and add 194 assists for 463 points, as well as 771 penalty minutes, in 655 regular season contests. He also scored 14 goals and 13 assists for 27 points and added 94 minutes in penalties in 53 playoff games. At the time of his retirement, Joliat was third in career goals, behind Morenz and Nels Stewart.

Following his playing career, Aurèle turned to officiating, and was the referee on duty the evening Maurice Richard made his NHL debut in 1942.

His last turn on Montreal Forum ice came in 1985 when the Montreal Canadiens selected their 75th anniversary 'Dream Team, and invited each of the surviving members to return to the Forum to relive their glory and have one final turn around the ice. That date was January 12, 1985. The 'Dream Team' was comprised of goaltender Jacques Plante, defencemen Doug Harvey and Larry Robinson and forwards Maurice Richard, Dickie Moore and Jean Beliveau. As the oldest alumnus of the Canadiens, Aurèle was invited to join the prestigious group on the ice. Wearing a Canadiens sweater and his trademark cap, the 83-year-old Joliat tripped over the carpet, much to the horror of all who witnessed the spill. But, he got up and proceeded to skate with the puck the length of the Forum ice and shot it into the empty goal to thunderous applause. And then he stumbled again. "The ghost of Eddie Shore must have put that damn rug in front of me," he later chuckled.

His number 4 jersey was "co-retired" in 1984, having been previously retired in Jean Béliveau's honour, yet no banner for Joliat hangs in the Bell Centre.

Aurèle Joliat was inducted into the Hockey Hall of Fame in 1947, the third player from the Montreal Canadiens to receive the honor.

Aurèle ‘Mighty Atom’ Émile Joliat was inducted into the Ottawa Sports Hall of Fame in 1966.

Aurèle Joliat was inducted into Canada's Sports Hall of Fame in 1975.