Lady Byng donator of the NHL Lady Byng Trophy in 1925 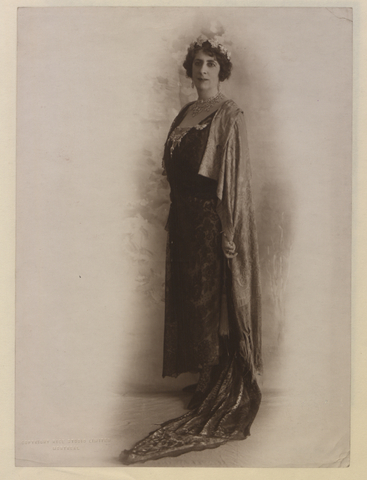 Evelyn Byng married, at St Paul's Church, Knightsbridge, on 30 April 1902 to Colonel the Hon. Julian Byng, youngest son of the 2nd Earl of Strafford. They lived in India before the outbreak of the First World War, and moved to Canada on his appointment as Governor-General in 1921. He was created Baron Byng of Vimy in 1919, for his service during the war, and Viscount Byng of Vimy in 1928, after his service in Canada. They had no children.

Lady Byng is best known today for donating the Lady Byng Trophy to the National Hockey League in 1925. She and her husband were both keen sports fans, especially of ice hockey, and they attended many Ottawa Senators games. They donated the trophy because Lady Byng appreciated gentlemanly play and good sportsmanship and wanted to encourage and reward it.

The Lady Byng Memorial Trophy, formerly known as the Lady Byng Trophy, is presented each year to the National Hockey League "player adjudged to have exhibited the best type of sportsmanship and gentlemanly conduct combined with a high standard of playing ability".

The voting is conducted at the end of the regular season by members of the Professional Hockey Writers Association, and each individual voter ranks their top five candidates on a 10-7-5-3-1 points system. Three finalists are named and the trophy is awarded at the NHL Awards ceremony after the Stanley Cup Playoffs.

Lady Byng decided the trophy's first winner would be Frank Nighbor of the Ottawa Senators. Late in the 1925 season, Lady Byng invited Nighbor to Rideau Hall, showed him the trophy, and asked him if the NHL would accept it as an award for its most gentlemanly player. When Nighbor said he thought the NHL would, Lady Byng, much to Nighbor's surprise, awarded him the trophy.

After Frank Boucher of the New York Rangers won the award seven times within eight years, Lady Byng was so impressed that she gave him the original trophy to keep. Lady Byng then donated a second trophy in 1935–36.

When Lady Byng died in 1949 the NHL presented another trophy and changed the official name to the Lady Byng Memorial Trophy.

In 1962, the original trophy was destroyed in a fire at Boucher's home.