John Wayne as a Hockey Player - Idol of the Crowds 1937 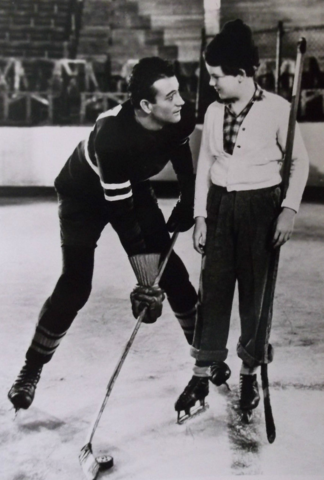 John Wayne as a Hockey Player

Idol of the Crowds is a 1937 American drama film, directed by Arthur Lubin and starring John Wayne as an ice Hockey player.

The New York Panthers ice hockey team is struggling in the standings. A scouting team headed by Kelly (Hopton) heads to Maine where they've heard of a promising former amateur player. He turns out to be John Hanson (Wayne), now a chicken farmer.

Hanson does not wish to return to the game, but when he learns how much money he can make, he agrees solely so he can make enough to upgrade his farm. His skills make him an instant sensation, but as the team heads toward the championship series, he runs afoul of crooked gamblers and the beautiful woman (Bromley) they tempt him with.

Marion Mitchell Morrison - Born Marion Robert Morrison, May 26, 1907in Winterset, Iowa – Died June 11, 1979 in Los Angeles, California, better known by his stage name John Wayne, was an American film actor, director, and producer. An Academy Award-winner for True Grit (1969), Wayne was among the top box office draws for three decades. An enduring American icon, for several generations of Americans he epitomized rugged masculinity and is famous for his demeanor, including his distinctive calm voice, walk, and height.