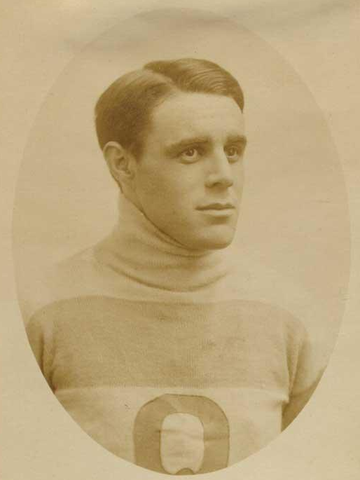 Malone was notable for his scoring feats and his clean play. He scored the second-most career goals of any player in major Hockey's first half-century and is the only player in the history of the NHA / NHL to score nine goals in a single game.

Malone grew up on the shores of the St. Lawrence River. He was a well-rounded athlete, playing Hockey, lacrosse and baseball as a boy. At 17, he played with the Quebec City Crescents in his first organized Hockey game.

Malone broke in at the age of 19 for the Quebec Bulldogs of the Eastern Canada Hockey Association in the 1909 season, scoring eight goals in 12 games. The next season the NHA formed, but Quebec was left out of the loop, so he played for the Waterloo Colts in the Ontario Professional Hockey League.

Rejoining Quebec in 1911, Malone was named the team captain and so served for the Bulldogs' seven NHA seasons. Centering linemates such as Eddie Oatman and Tommy Marks.

When the NHL was founded in 1917, Quebec did not operate a team its first season and the team's players were dispersed amongst the other teams. Malone was claimed by the Montreal Canadiens. Playing on what was one of the most powerful forward lines of all time with Newsy Lalonde and Didier Pitre, Malone shifted to left wing to accommodate the great Lalonde, and was the NHL's first scoring leader, registering 44 goals in 20 games, a record total that would stand as the NHL's single season goal scoring mark until 1945 and a record per-game average that stands to this day. (If such an average was sustained over today's 82-game schedule, it would result in 180 goals, nearly double Wayne Gretzky's record of 92.) Malone scored at least one goal (and a total of 35 goals) in his first 14 NHL games to set the record for the longest goal-scoring streak to begin an NHL career. This streak still stands as the second-longest goal-scoring streak in NHL history.

The following season Malone suffered an injured arm and missed most of the regular season, although he scored six goals in five games in the league final series against the Ottawa Senators; the lingering injury held him out of the ill-fated Cup finals against the Seattle Metropolitans.

Quebec revived its franchise in 1919 and Malone rejoined his club, once more leading the league in scoring with 39 goals, and setting a single game goal-scoring mark which still stands of seven against Toronto on January 31, 1920. However, the team was very weak on the ice—its goaltender had the poorest goals-against average the NHL would ever see (7.13 GAA) - and recorded a 4-20 record on the season.

Malone finished his career with 343 goals and 32 assists over 15 professional seasons.

Joe Malone is a member of the Canadian Sports Hall of Fame.